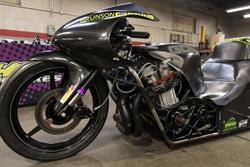 Sentry Industries manufactures parts that hit speeds of up to 200 mph and travel one-eighth of a mile in just four seconds. The Rock Island, Illinois, shop specializes in high-performance components and assemblies primarily for the pro-modified motorcycle drag racing industry, in addition to its other general contract machining and prototyping work.

Motorcycle drag racing teams modify their bikes any way possible to hit the highest speeds and make the shortest run times. The only rules are that the bike has to weigh at least 625 lbs (with the rider) and the wheelbase must be kept to a minimum specified length.

Also, engine displacement may not exceed 1,800 cc (cubic centimeters). However, most racing teams will modify their engines and add nitrous. So when all is said and done, a standard factory 1,100-cc motorcycle motor that originally generated only 82 hp will crank out a whopping 500 hp.

In one race weekend, the typical drag bike does three qualifying runs, then three or four rounds of the actual elimination racing to get to the finals. The parts produced by Sentry have to be of the highest quality. If just one part on the bike fails, the results can not only abruptly end the whole season for a drag racing team, but also put its rider’s safety in serious jeopardy. 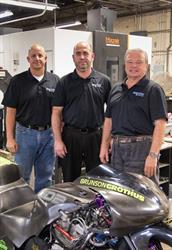 When a drag bike comes off the line, its engine puts out extreme levels of power and torque that make its other components want to twist and flex out of shape. Therefore, Sentry parts must be strong enough to withstand such deformation and prevent failure, yet lightweight for speed.

“We manufacture our drag bike parts to the highest quality standards – as we do for all our other non-racing jobs,” said Scott Yates, president of Sentry Industries. “Our parts and assemblies are the tough ones that other shops are unable to make cost effectively, if at all. Our jobs require talented machinists and advanced machine tool technology that provides performance and versatility. And for us, that technology has always come from Mazak.”

Currently, Sentry has a QUICK TURN NEXUS (QTN) 250-II MY turning center with multi-tasking capabilities and a VERTICAL CENTER UNIVERSAL (VCU) 500C vertical machining center. As an (MY) configuration, the QTN 250-II MY features milling capability and Y-axis functionality along with a standard through-hole chuck package and integral turning spindle motor to process a wide range of parts in single setups.

Sentry’s VCU-500C features a 3-axis table and gives the shop exceptional production value and versatility. With an added fourth-axis rotary unit, the machine lets the shop machine any billet-type part that would go on a racing bike.

Yates pointed out that opting for the rotary axis was easily justified because it’s programmable and allows them to handle parts on one machine as opposed to two. In most instances, Sentry uses the rotary unit in a horizontal machining fashion, meaning it rotates parts on center to access all sides and machine angles and contours all in one clamping. 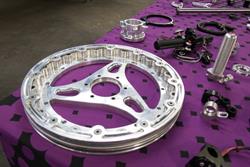 “For a simple, basic machine, the VCU-500C provides a lot of capabilities and incredible machining precision for every part we run on it,” said Yates. “And with the QTN 250-II MY, we get flexibility and processing versatility because it lets us turn and mill on the same machine. The performance of our Mazaks is second to none, but what we like best about them are their controls. I’m a huge believer in Mazak’s MAZATROL controls, and I have yet to find another control that is more user friendly or allows for faster programming – two control features that are critical for our multitude of one-off part jobs.”

Coincidentally, Yates’ first experience with Mazak machines was 25 years ago when he attended a MAZATROL part programming class at the Mazak Midwest Technology Center in Schaumburg, Illinois. At the time, he was working for Rabbit Tool, and its owner O.J. Birkestrand, now a close friend and business associate of Sentry. Rabbit Tool had all Mazaks and Birkestrand insisted Yates attend the class.

“I had zero experience with Mazaks, and since that first programming class, I’ve been a diehard fan of the machines due to their ease of use and amazing reliability,” said Yates.

At Sentry, jobs don’t run for weeks. At any given time, the shop can have as many over 15 different one-piece orders that it must quickly set up, program and run – completing all of them within a day or two.

Sentry is a low-volume, high-mix production shop. And besides drag bike parts, it does quite a bit of contract machining jobs. The majority of parts at Sentry are made from aluminum billets and part tolerances can be as tight as 0.0005". However, the motorcycle frames are made from 4130 Chrome molybdenum tubing with wall thicknesses that are required to be least 0.058" thick, and O.D.s are between 0.875" to 1.000".  There is also some oval shaped tubing used. 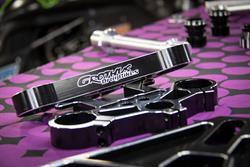 Sentry and its drag racing motorcycle work both started when Yates reconnected with a long-time neighbor and friend Ed Grothus, team owner of Grothus Racing and current vice president at Sentry Industries. Grothus Racing is also the exclusive retailer of Sentry’s high-performance racing parts and assemblies.

Yates had always been interested in motorcycle drag bikes and was at a race when Grothus’s team broke a very expensive, tough-to-replace transmission part. Yates suggested making the part themselves and offered his and Rabbit Tool’s machining services because at the time he was still working for Birkestrand.

After that initial part, Yates helped build drag bike chassis as well as produce several other components and assemblies. He then realized he could offer these same component and assemblies for retail sale, and officially launched Sentry in 2014.

“Grothus knew how to build a good chassis himself, but he was at the mercy of vendors and outside suppliers for other parts,” explained Yates. “These included front-end assemblies, aluminum billet parts, engine components and a lot more. So, I offered more of Sentry’s help, and we now build complete race-ready rolling chassis – frame, front and rear wheels, handlebars, carbon fiber bodies and other parts – for other teams that just have to bolt on their own engines.”

A drag racing motorcycle’s front wheel lifts off the ground at the start of a race and, for the most part, stays that way for about half of the eighth-mile run. When it does return to the track surface, the front-end assembly must be one that completely dampens the impact.

Sentry initially tooled up to produce 15 to 20 front-end assemblies, just to see how well they’d be received in the marketplace. They proved quite popular, mainly because of the significantly reduced cost, yet very high quality workmanship and performance.

The shop was able to reduce its production costs, and thus pass the savings on to customers. Acquiring its Mazak VCU-500C allowed Sentry to machine the assembly lower axle blocks, the one part that had been farmed out and was very expensive to have produced.

As a unique aspect of its front-end assemblies, Sentry’s triple clamp set includes a complete IQ3 race pack digital dashboard. It displays a variety of gages to monitor everything from engine rpms to oil pressure, as well as any other sensors used on a racing bike.

The dash attaches to the clamp set without the use of brackets. In the past, racing teams had to make custom brackets to mount these gauges to their existing front ends. The set ups were often so bulky, that some teams would run without a dashboard. 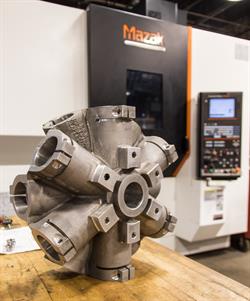 Some of Sentry’s more complex components are those for its throttle assemblies. The shop is one of few able to machine the challenging parts and do so cost effectively.

“Throttle assembly parts require high CNC machine capability, such as that from out Mazaks, and very skilled machinists,” commented Yates. “These are a perfect example of the complex parts we chase. Any shop can machine simple wheel axles, but it’s a whole different ball game to produce these throttle parts. Once we got going on the assemblies, they flew off the shelf and continue to be hot sellers.”

The individuals involved with Sentry are a close-knit group. In fact, the Sentry name is a combination of the three key players. The “S” is for Scott Yates, the “E” for Ed Grothus and the “N” for Norman Korte, treasurer at Sentry Industries – all followed by the word “try.”

Yates and Sentry still work closely with Rabbit Tool and Birkestrand, and together both shops have ventured into the wind energy sector. They plan to produce residential wind turbines that are smaller in size and built to mount on rooftops. If all goes according to plan, their specific design will not only generate electricity, but also heating and cooling for homes.

Sentry will be the main parts supplier for this project. The shop also plans to further expand its presence in the high-performance racing industry by producing some of the larger components for drag bikes, which, according to Yates, will mean more Mazaks at Sentry.