Techniform relies on the speed and precision of its Mazak VTCs to impart details along stretch form part lengths up to 45' and at their opposite ends.

What was once a significant cost for Techniform is now a major profit center. The Mabank, TX, shop specializes in stretch form metal curving/fabrication to produce components used for everything from planes, trains and automobiles to roller coasters and window assemblies in high-rise buildings. Practically all of these formed components require conventional machining - work the shop farmed out to local suppliers. Unfortunately, in doing so, Techniform was subjected to the schedules and often long lead times of those suppliers, not to mention inconsistent part quality from one job to the next.

Techniform routinely farmed out several hundred part numbers for machining work. However, upon the return of these jobs, the shop wasted a lot of time sorting through parts, inspecting them and inevitably rejecting many of them - adding the cost of raw materials to the list of losses as well. This is when Techniform decided to bring its machining operations in-house, which, according to Jon Harrison, Executive Vice President and General Manager, completely transformed Techniform's whole business.

"Our customers want one supplier that produces kits or complete assemblies," explained Harrison. "They not only want their parts curved, but also have all the machining done, be painted and ready for installation. With in-house machining capabilities, we can now supply those complete components and kits in a timely fashion. As a result, we have been able to increase our sales two-fold to our existing customers. Plus, our marketability has skyrocketed, and we now pursue those customers we were unable to when we lacked in-house machining." 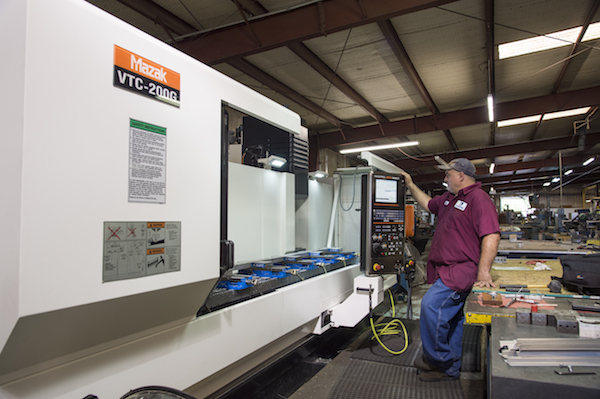 The stationary tables of Techniform's Mazak VTCs accommodate the shop's workpieces that are too big and long for moving worktable machines.

Prior to bringing its machining in-house, Techniform's part scrap rate was between 10% and 12%. That amount has since dropped to practically nil, which, in turn, shortens job turnarounds, eliminates time wasted on rework and saves on material costs.

"Very few stretch form shops can compete with us now that we do machining," said Harrison. "Some claim they machine, but not to the extent we do. The reason for that is most shops lack the equipment needed to machine the big curved parts the size of the ones we stretch form." 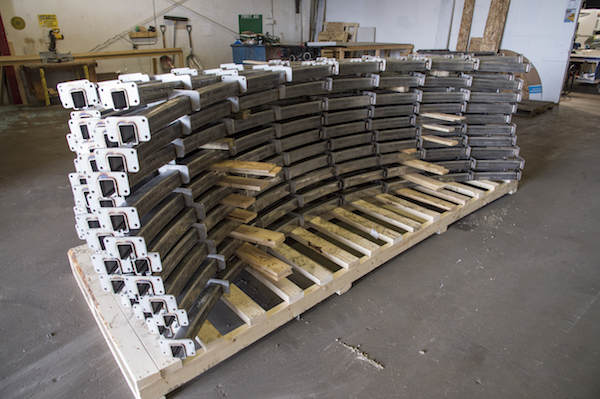 Many of Techniform's workpieces - such as these bakery oven conveyor components - require bending, welding and machining.

However, the sizes of Techniform's parts make them a challenge to machine. This was a key factor in determining exactly what type of machine tools the shop needed for its new in-house operations.

The shop's parts are not overly wide, but often long. The largest widths tend to be about 10", while lengths can run up to 45'. With this in mind, Techniform determined it needed vertical machining centers (VMCs) with stationary tables because parts are just too big and long for a moving worktable.

Vertical traveling column (VTC) style machines were the solution, and the shop acquired its first one, a VTC-200C, from Mazak in 2014, and then two years later a second one, a VTC-200G. Within a short span of having its Mazaks, the shop was successfully up and running machining operations it had never done prior and brought about 200 part numbers back in-house.

The VTC-200C and 200G feature full traveling column designs and fixed tables for machining of extremely long and heavy workpieces. The 3-axis machines are equipped with CAT 40 taper, 12,000 RPM spindles and 24-tool storage capacities. The VTC-200C has a worktable length of 6.5' while the VTC-200G's measures around 12' in length." 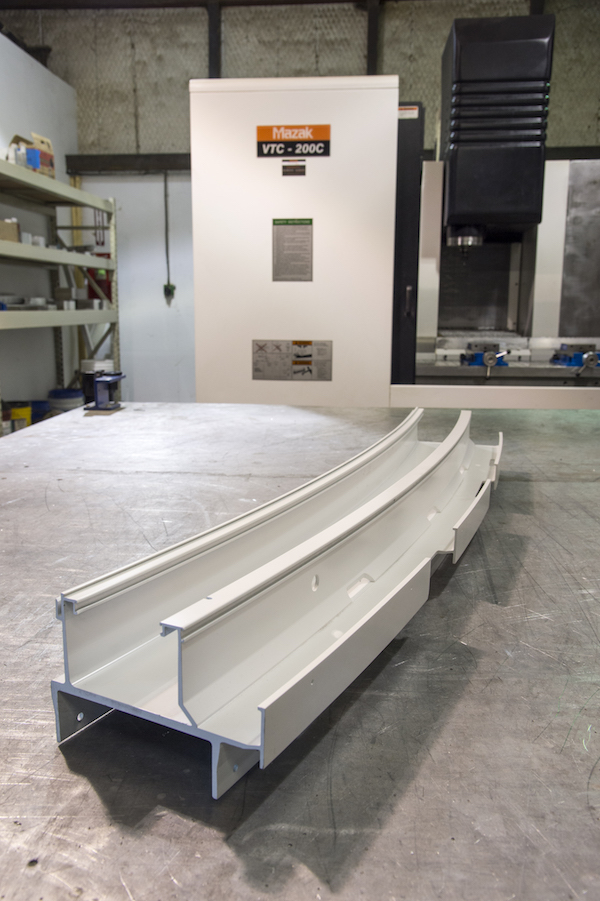 In-house machining capabilities with the Mazaks have decreased our lead times and virtually eliminated the scrap rate involved with the farmed out work," said Harrison. "The Mazaks are fast and accurate, and once customers discovered we had them, they asked us to take on even more machining work."

According to Scott Oechsner, Engineering Manager at Techniform, the Mazaks provide dependability and versatility. They allow the shop to tackle lots of different types of parts, both curved and straight.

"In addition to the benefits of stationary tables for our large parts," said Oechsner, "the Mazaks provide ample tool storage capacity that is especially beneficial for our longer, more extensive machining programs. We can run a variety of tools through one set-up. Plus, the machines are easy to program and set up, so we quickly and effortlessly get parts on and off them for maximum output."

Techniform's stretch forming production operations run one shift per day, while the Mazaks tend to work two shifts. Some of the shop's customers need parts turned around in a week, while others require certain amounts of parts at specific intervals. For instance, architectural customers may require all of the components for a single high-rise floor at a time during the course of a building construction. Or, aerospace customers will have Techniform manage their inventory of parts such as stringers for aircraft tail sections that need shipped in, for example, lot sizes of 15 pieces at a time over 65 part numbers, on a monthly basis. The shop also machines its own form tooling for its bending and forming equipment. 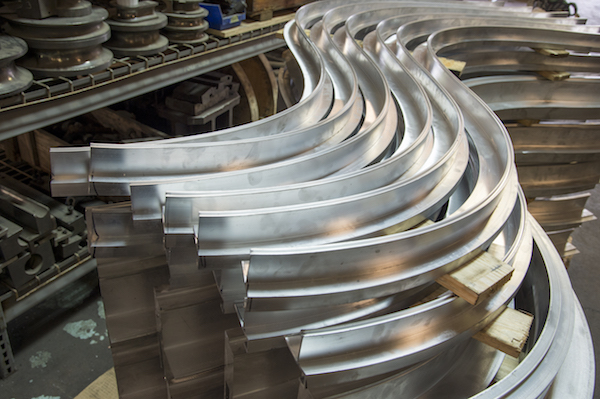 The Mazaks at Techniform are designed to easily handle the complex toolpaths and change features along the shop's mostly curved part lengths, such as those found on these glass-frame components for a high-rise building.

Part materials at Techniform are mostly aluminum and steel, and tolerances depend on industry sector and actual finished product. For one customer, hole location tolerances must be held to +/- 0.005", and others may require details to be held between 0.010" to 0.030". However, Oechsner pointed out that these details can be located at opposite ends of very long parts.

Material thicknesses can vary from as thin as 0.020" to 2" thick, and most machining on the Mazaks is profiling, along with the generation of holes and notches. Typical machining cycle times are part dependent and range anywhere from three to 25 minutes.

Techniform can curve parts up to 45' long and then machine details at the two opposite ends on its Mazaks. The other machining challenge is that part features change along a part's length because they are curved. This means that the shop must use different and changing reference points all along the part when machining, which, according to Oechsner, can make for some complex toolpaths. But the machines are easy to program and allow the shop to quickly set up and run parts. 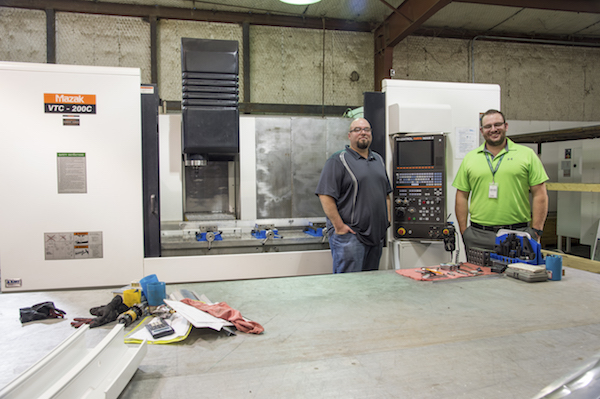 Stretch-formed parts from Techniform are used in a myriad of applications. The shop's customers are located worldwide, and the shop ships product to Canada, Mexico, Columbia, the Middle East and several other countries. But Harrison offered a word of caution.

"You can have all the capacity in the world, but if you are not shipping a quality product on time, you will not be long in this business," he said. "And machining in-house with our Mazaks ensures we do on a consistent basis."

As seen in Manufacturing News, January 2017