As an innovative and forward-thinking supplier to the sport and recreational watercraft industry, Roswell Marine must design, produce and get new products to market as quickly as possible to maintain its competitiveness. To accomplish that, the Rockledge, Florida, shop relies on in-house manufacturing and most importantly on extremely flexible and highly productive machine tool systems.

In existence for over 20 years, Roswell’s claim-to-fame products include towers and accessories for wakeboard/waterski boats. It was the first to design and bring to market swiveling board racks for such boats as well as the “universal” style tower and weightless and folder towers for attaching waterski/wakeboard towlines. Other products include bimini tops and complete marine audio systems, including premium speakers and fully engineered custom sound systems. In all, Roswell offers over 500 products.

Robert Oswell, CEO and chairman of Roswell Marine, started the company in Western Canada, where originally all the design, engineering and manufacturing happened. He then expanded operations to plants in Asia and Australia, and with a bold willingness to build premium products in the United States, he opened the company’s Florida facility in 2007 that now employs 42 people.

From the day it started, the Florida facility grew exponentially from a design, engineering and distribution center, to its current status as a full-fledged manufacturing plant. With Florida being the largest boating state in the United States, according to Oswell, it made sense for the company to manufacture there. Plus, it put them closer to the watercraft OEMs they supply. 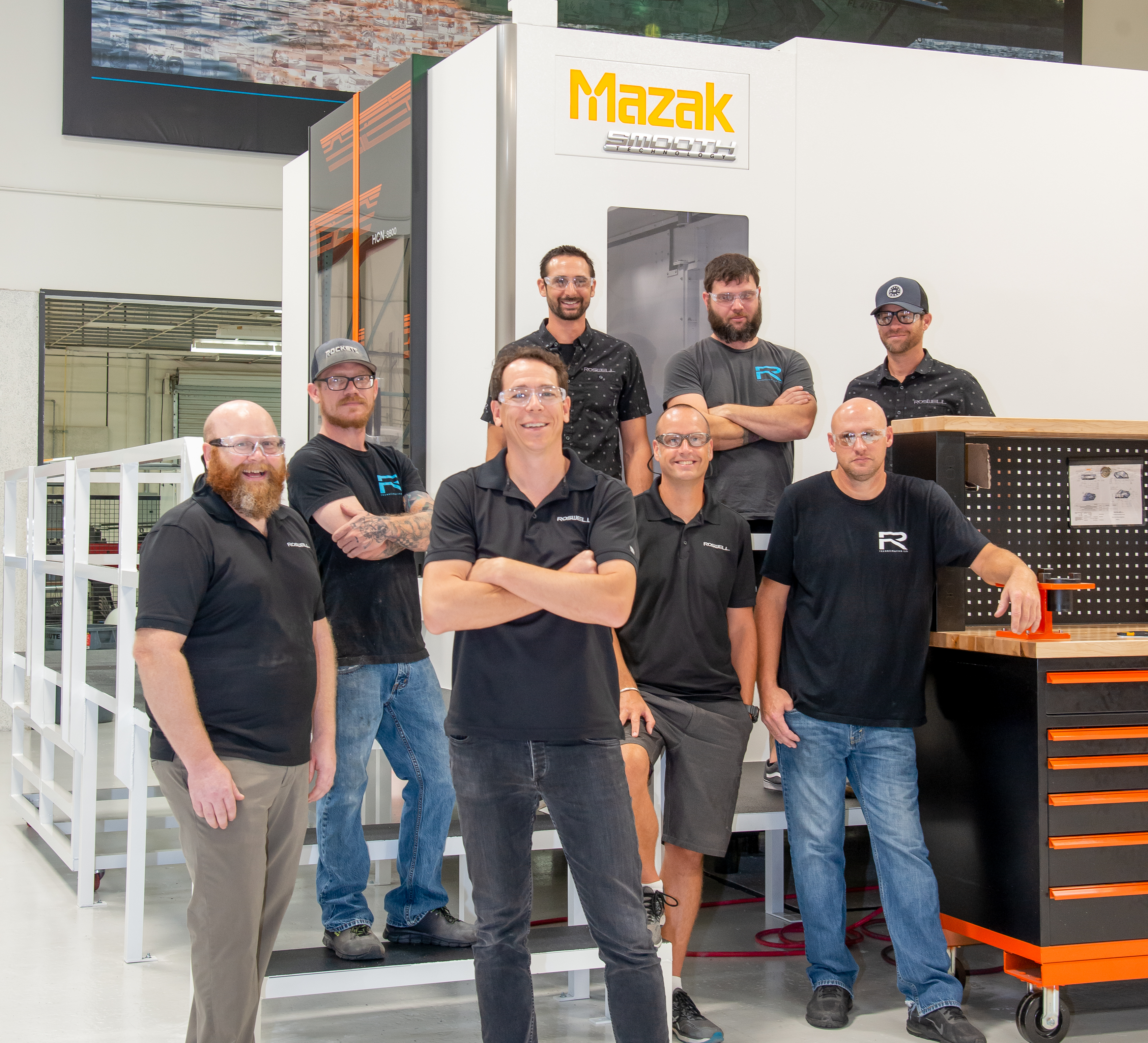 All the company’s manufacturing operations have always been in-house for quality control purposes. These operations include everything from plastic injection molding to CNC machining, welding, fabricating and painting. “From napkin sketch to customer-ready product, we control all aspects of the product lifecycle,” commented Oswell. “Product and manufacturing flow is determined according to current industry best practices and all internal past captured data. We look for the best equipment and software that will keep us efficient and competitive, all while supplying the highest quality parts.”

When additional technology was needed to further step up in-house CNC machining capabilities in Florida, Roswell researched and conducted competitive comparisons, and one manufacturing technology supplier, Mazak, came out on top and drew Roswell’s attention. “Every aspect of Mazak we looked at – from the depth of its advanced manufacturing technology and experience to its customer service, training capabilities and warranties – further convinced us that they were the best in class,” said Oswell.

The modular palletized manufacturing system further boosts the productivity of many of the company’s horizontal, 5-axis and Multi-Tasking machines – no matter the operation or volume requirement. It can also complement articulated robots in highly advanced automation scenarios that involve Mazak machines. 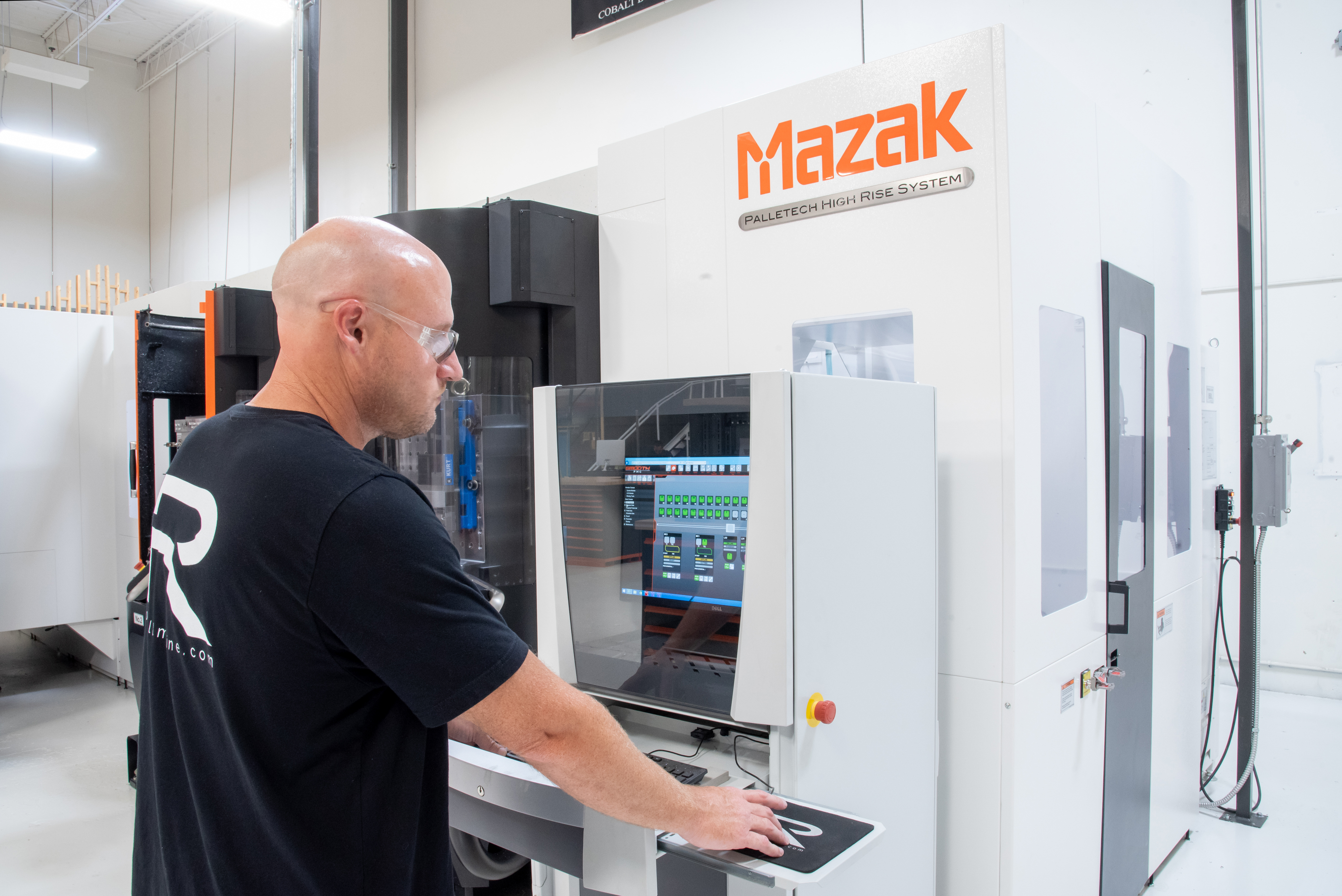 PALLETECH starter systems come with six, 12 or 18 pallet stockers. The system’s modular design makes it easy to add pallets, loading stations and part wash stations at anytime. Overall, a PALLETECH System can accommodate up to 16 Mazak machines, six to 240 pallets and as many as eight loading stations for manufacturers requiring a fully automated cell for lights-out operation.

According to John Runske, program implementation manager at Roswell Marine, the 31.5” (800 mm) pallet size and maximum workpiece height of 57.090” (1450 mm) of the Mazak HCN 8800 allows the shop to accommodate very large parts, such as cast aluminum billets that may start out weighing 700 lbs and when completely machined on the HCN 8800 end up at only 70 lbs.

“We make parts from billets until we can produce them from a cast part,” explained Runske. “The cast parts then allow us to reduce our material removal time significantly. Lead time for a cast part might run 12 to 14 weeks, as opposed to machining from a billet that results in finished parts in a few days.”

The shop machines a lot of aluminum and some stainless steel and plastics. Typical tolerances are tight, but what is more critical are part surface finishes.  Part sizes measure from 1” x 1” up to 30” x 30” x 15”.

In addition to part capacity and machining speed, Roswell relies on the flexibility of its Mazaks to produce all the shop’s different parts with the same equipment. It’s typical for the shop to run a days-worth of work and produce several very different parts for as many as four separate watercraft OEM customers.

“The quick interchangeability and flexibility of the Mazaks, especially the PALLETECH system, is key to obtaining this manufacturing agility,” said Runske. “We can be running one part, then two hours later, for instance, we can run a completely different one, then an hour after that another different one. So for shops like ours producing a lot of different products, the PALLETECH system is quite beneficial, allowing us to prioritize and schedule prototyping parts in the middle of our production cycles by allocating some of the pallets to prototype work all within the same cell.”

Equally critical as quality and output for Roswell is cost per part, and the increased efficiency from its Mazak HCN Horizontal Machining Centers and  PALLETECH results in faster turnarounds for lower costs. The PALLETECH system also provides more production capacity per square foot of shop space and the ability to run 24 hours per day.

Part production at Roswell is typically in the thousands, and any one finished product might consist of 120 to 150 separate components. On the whole, the shop pumps out about 20,000 to 30,000 parts per month and brings about 30 new products to market annually.

New product design cycles vary from eight months up to two years, depending on the project. “It is extremely critical that we meet our new product deadlines for clients, who are some of the industry’s best watercraft companies in the world,” said Oswell. “Speed and quality are of the utmost because our products are part of their watercraft builds and are integrated into their finished consumer products.”

Oswell continued saying that what differentiates Roswell from its competition is design and engineering. The company is always the first to market with new and exciting products. In fact, Roswell has just patented several new technologies – including a push-button, fully automatic telescoping bimini  system that Oswell said will revolutionize boat designs. All of which translates into expanded manufacturing in the United States.

“As we continue to grow, Mazak will play a key role in our manufacturing operations,” said Oswell. “The Mazaks we have now are just the beginning because we believe that such technology is critical to competitive U.S. manufacturing. The machines’ high levels of efficiency and Mazak’s continued innovation is what makes manufacturing in the United States viable and profitable for Roswell.