Shop Moves from Manual to Multi-tasking, Simple to Complex

What started with one manual mill and lathe quickly grew into an extremely productive machine shop that attributes its success to CNC and multi-tasking machining capability. With that technology, Industrial Machine Works Inc. in Baker, La., consistently shortened its job turnaround times and increased production capacity. But most importantly, the shop has been able to expand its business because of an ability to efficiently and cost effectively machine parts that are much more complex than any it had ever done in the past.

At the onset of Industrial Machine Works, the shop was only a two-person garage operation with machinists Mark Wilks, now president, and Blane Adams, now vice-president. The two worked from early in the morning to late into the evening seven days a week and still struggled to keep pace with surging customer demand. This is when Wilks and Adams made the move from manual to CNC, then, shortly thereafter, into multi-tasking. 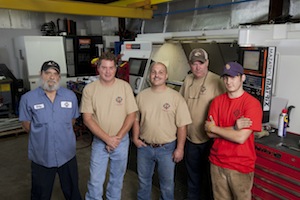 The shop’s first CNC machine was a Mazak QUICK TURN NEXUS (QTN) 350-II Turning Center acquired through the machine tool builder’s distributor Dixie Mill in New Orleans. The machine features a 60” long bed and is equipped with a 40-hp, 3,300-rpm spindle (4.4” through-bore for 4” maximum bar capacity) and standard 12” chuck. To accommodate an even wider range of workpiece sizes, Industrial Machine Works opted for a 15” chuck with maximum spindle speed of 2,500 rpm on its machine.

With the QTN 2-axis turning machine, Industrial Machine Works immediately boosted its production speed and output – taking on even more customers and work and adding three more employees. However, the shop soon found itself, once again, unable to keep up with orders.

After evaluating the increasingly complex parts they were being asked to machine, both Wilks and Adams realized that multi-tasking technology – specifically turning and milling with Y-axis off-center machining capability – would benefit production the most. So once again, the shop worked with Dixie Mill and acquired another Mazak QTN 350-II, but this time one with milling and Y-axis. 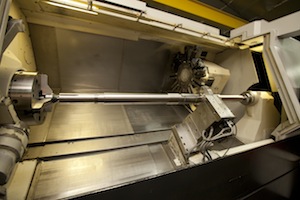 While its first QTN 350-II provided numerous benefits, the shop quickly realized the QTN 350-II MY could further speed part production and drastically reduce work in progress simply by eliminating the need to move parts from one machine to another for turning then milling operations. The new multi-tasking machine makes it possible to process parts that are even more complex, and do so in single machine setups. For Industrial Machine Works, this means jobs come off the machine faster and are changed over quicker, thus opening up additional machine capacity to take on more work.

Industrial Machine Works does significant work for the oil and gas, paper mill and pipeline equipment industries, and job lots average one to six pieces. However, many of these are often – three or four times a week – emergency orders that must be turned around within 24 hours, while other regularly occurring jobs have two- or three-week delivery times. Currently, the shop completes approximately 50 to 60 jobs per month – and that amount continues to grow.

“The fact that our work load increased and that parts got more complex is what drove us to multi-tasking technology,” said Wilks. “And now that we have the machine, we actively pursue even more jobs involving complex parts that we would never consider doing without the Mazak because we would be unable to produce them at a profit using conventional machine tools.”

One such complex part Industrial Machine Works produces cost effectively with its QTN 350-II MY is a biting slip – a tool that grips oil well piping to remove it from down hole wells. The part, made from 8620 steel, is one that most shops would not consider doing on a machine such as the QTN 350-II MY.

While made from bar stock, the part requires almost all milling operations and involves numerous angles and a knurl pattern that wrap around the part’s overall radius-shape. On the Mazak, Industrial Machine Works completes the biting tool in one setup. Plus, it is able to produce three parts from the periphery of a single piece of bar stock. And according to Adams, the only reason the shop was able to take this job was because of multi-tasking machining capability. 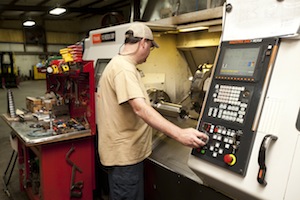 “You have to approach jobs thinking outside the box when it comes to multi-tasking,” he said. “With the QTN 350-II MY, we figure out how to do milling jobs on basically a turning machine.”

He cited another job example involving a block-shaped part with a hole bored through it. The part was a challenge because the shop had to split it into two separate mating pieces that were then bolted together. When the pieces were assembled, the two halves had to come together precisely so that the bored hole was perfectly round and concentric. This meant that simply boring the hole on a turning machine and cutting the part in half was out of the question.

While a conventional approach would be to produce both part halves from separate pieces of material, doing so would have been inefficient and time consuming. So instead, Industrial Machine Works produces both pieces as a whole at one time from hollow bar stock, thanks to the capabilities of its QTN -350-II MY. With the machine’s milling and Y-axis functionalities, the shop helical mills a highly precise oblong shaped bore to a size that when the two part halves are assembled, the bore comes out perfectly round. This processing method produces the parts twice as fast and consumes less raw material.

Because of its low job lot sizes and many unexpected emergency 24-hour rush orders, Industrial Machine Works strives to quickly change over jobs and set machines up as fast as possible. Three ways the shop accomplishes this is by trying to produce as many jobs as it can from bar stock, incorporating quick-change jaw systems and using face drivers as much as possible.

“On the Mazak QTNs, we try to produce every part we can from round bar stock. That way the only set up is clamping the material in the chuck for generating multiple parts,” explained Adams. “Our goal is to clamp parts once and machine them – no repositioning. With the Mazaks, we can.” 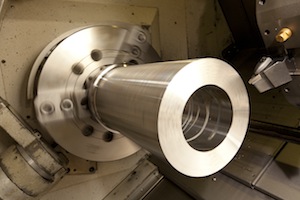 The shop also tries to avoid expensive and complicated fixturing or jigs when it comes to setups. Chucks hold the majority of the parts, and for that reason, the shop uses quick-change chuck jaw systems to speed job changeovers. The systems allow the shop to change chuck jaws in a matter of seconds.

For its long shaft-type parts, Industrial Machine Works shortens setup times and avoids having to chuck parts twice during machining by running them between centers using face drivers. Adams explained that face drivers allow the shop to completely machine a part by working from one end then the other and doing all the milling in one clamping. He also said that the machine’s NC programmable tailstock further contributes to shortening setup times.

“Without the QTN 350-II MY,” said Adams, “we would need huge mills to machine hexes or drill holes at the end of our long-shaft parts, meaning part processing would require two machines, as opposed to one.”

Even though parts have become more complex at Industrial Machine Works, Adams said that programming them is fast and easy with the MATRIX NEXUS CNC controls on the Mazak QTN machines. He attributes this speed to the fact that the controls provide the shop the option to program using conversational or EIA/ISO input. The shop programs about 99 percent of its part applications at the machines, and according to both Wilks and Adams, learning to program the Mazaks took only a day and involved no official training.

“We did have some CNC programming experience from our previous jobs,” said Adams. “However, we had never worked with Mazak’s control or with a multi-tasking machine for that matter. But whether we are programming a simple or complex part, Mazak’s control is a whole lot easier and faster than others we’ve used, and that’s important considering how much we program at the machines. When we got the first QTN, we didn’t have time to be apprehensive about programming or even running the machine. We had a backlog and had to get parts out the door, and we were able to immediately hit the ground running with that machine because it was so easy to program.” 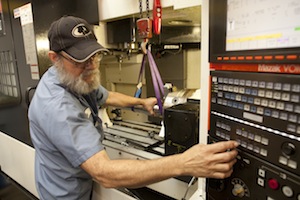 “Prior to the VCN 510C, we would process those complex parts involving only milling operations using the QTN 350-II MY,” said Wilks. “These are parts that really didn’t require the capabilities of a multi-tasking machine, but at the time, it was our only option because we did not have a CNC milling machine. Now, with its 30-tool storage capacity and rotary unit, the VCN 510C allows us to reduce job changeover times and quickly process complex parts requiring only milling in single setups while opening up capacity on our multi-tasking machine.”

Wilks estimated that, without its three Mazaks and the capabilities they provide, Industrial Machine Works would need twice as many machines and about double the size of its current workforce to maintain its current production levels. The shop is also in the process of boosting its production levels in terms of bigger complex parts.

“Our customers see what we accomplish in terms of speed, accuracy and quality. Now these customers want us to do the same for their bigger parts, so we have to adapt,” he said. “And as we have from the start, we’ll rely on Mazak for technological and applications support.”