Shop Gives Props to DONE IN ONE Cellular Manufacturing

Hartzell Propeller Inc, with roots tracing back to a relationship with the Wright Airplane Co. (founded by the Wright Brothers) is one shop that gives the utmost proper recognition to manufacturing cells – in particular those that incorporate multi-tasking done-in-one machine technology. These special types of cells, over the past few years, have not only allowed the shop to continuously boost its aircraft propeller production output, but do so using less equipment and smaller amounts of manufacturing floor space. 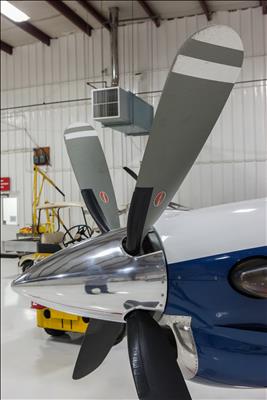 Hartzell Propeller employs 300 people and is a high-volume, high-production shop that runs 24/7. It puts out between 350 and 400 propeller assemblies per month, and one assembly constitutes about 200 individual parts. Half the shop’s business is producing brand new assemblies, while the other half is support and spare parts.

In the early 1990s, Hartzell installed its first group of manufacturing cells and now has about 16 that it has been continuously transforming into what are referred to as high-performance cells.  These cells, based on advanced machine technology, provide done-in-one part processing capability and are self-contained as well as self-directed.

“Precision and quality come first, and our goal is quality products every time, with shorter lead times and at the lowest possible cost,” said Craig Barhorst, manufacturing manager at Hartzell Propeller. “We accomplish this – while also controlling costs and increasing productivity – through advanced manufacturing technology. And when it comes to our high-performance cells – in addition to in-process inspection – the multi-tasking DONE IN ONE machine tool technology from Mazak has proven to be very effective.”

As Hartzell continues to incorporate more multi-tasking DONE IN ONE machine technology, Barhorst said the shop reduces the amount of machines needed in a cell, increases output per cell operator, completes parts in single simple setups, improves part accuracy and slashes overall part cycle times. In fact, he indicated that, on average, one Mazak Multi-Tasking machine allows his individual operators to each pump out the work equivalent to that of four or five conventional machines.

When adding a new piece of equipment to one of its cells, Hartzell will first prove out the machine at the company’s production simulation facility. Machinists will determine the best part fixtures, setups and tooling to use. Then, they will conduct production test runs of the actual part/parts the machine will be making to fine-tune the sequence of machining operations and achieve the shortest cycle times possible. 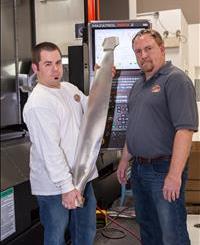 Off-line testing, according to Justin Carter, CNC programmer and process development manager at Hartzell, allows the shop to “work out all the bugs” of a new machining process without disrupting production operations at the main plant. The test facility also provides the perfect place for the machinist that will run the new system to actually train on it. And he added that once the production line is up, both the machinist and the new machine are instantly productive.

Over the last year or so, Hartzell Propeller set up, tooled up and test ran several Mazak Multi-Tasking machines that were then installed at Hartzell Engine Technologies. But most recently, Hartzell tested three other advanced Mazak machine tools for incorporating into high-performance cells at the propeller manufacturing facility. Those machines were a Mazak INTEGREX e-420H-S full 5-axis Multi-Tasking Machine, INTEGREX i-200ST Multi-Tasking Machine and a QUICK TURN NEXUS 400-II Turning Center.

On both the INTEGREX machines, Hartzell opted for Capto C6 spindle interfaces as well as expanded tool capacities – 80 on the INTEGREX e-420 and 110 (split magazines with 55 each) for the INTEGREX i-200ST. The reason for these larger tool magazines, according to Carter, is that the shop wants to set up tools and forget them.

“We don’t want our machinists wasting time having to pull tools in and out of a machine,” he explained. “Sometimes the tooling is redundant, but in most instances, it’s all different and pre-staged to handle families of parts within a cell.”

One key family of parts that will benefit from Mazak’s advanced machine tool technology is the blades for propeller assemblies. Hartzell estimates that the INTEGREX e-420H-S – loaded with advanced programming software, special tooling and custom fixturing – will slash machining cycle times by as much as 50 percent.

The shop produces over 500 different part number blades from a basic group of six different sized large-envelope forgings – largest size aircraft blade measures 5’ long and a special wind tunnel blade is 7’ long. Blades receive some rough machining on the O.D.s and I.D.s of their shanks – the interface to the hub of the propeller assembly. Then the airfoil contours get machined. Depending on size, complete machining time can range from 15 minutes up to an hour (for larger sizes). In machining operations, blades rotate around via the machine’s synchronized C-axis motion.

Balance among each blade of a propeller assembly is extremely critical, which is why Hartzell manufactures blades in sets. So for three-blade assemblies, for example, the shop would make the blades in groups of 3, 6, 9 and 12. And for tracking purposes, blades are serialized.

“Even though our manufacturing processes are extremely repeatable, there are several stages in blade set manufacturing when we will check balance,” explained Barhorst. “And when they are complete, we subject them to a digital balancing operation, then again when they are together as a complete propeller assembly.”

However, Barhorst added that with the highly accurate Mazak machine tool technology, the shop eliminates the necessity of machining serialized sets all at one time. Instead, it gains the production flexibility to, for instance, switch from machining blades for a three-blade propeller assembly to those for a four-blade assembly and back again – all on the same machine and without affecting blade integrity, accuracy or balance. 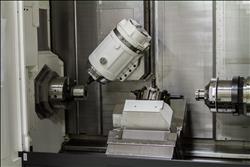 Along with precision and repeatability, the multi-tasking DONE IN ONE capability of Hartzell’s INTEGREX i-200ST gives the shop added processing power. Parts, such as shanks for composite blades, that once required turning, milling and drilling on separate machines, are now completed in single setup sequential operations. The machine essentially doubles production and significantly reduces machining cycle times.

Shanks are made from mostly stainless steel forgings, but some are aluminum or titanium. The parts go from raw forged weights of 14 lbs to 5 lbs after machining. Previously, the part took over 2.5 hours to complete and required multiple machines. The Mazak machines the part complete in less than 30 minutes and the shop expects to further reduce that time.

“We opted for the lower turret on the INTEGREX i-200ST because the shank parts involve a lot of turning, both I.D and O.D.,” said Carter. “Plus, we wanted to perform simultaneous operations – machining at both the main and second spindles at the same time. So basically, we get two parts machined for the time it used to take to do one and we do so with one machine setup.”

According to Carter, half of the part’s operations are done at the main spindle, then the remaining ones at the second spindle. Once the first part moves to the second spindle, a new part loads into the main, and the machine is then producing two parts simultaneously. “Our goal is that at least 80% of the time during a machining cycle, all the aspects (spindles and turret doing turning, milling drilling and tapping) of the machine are working.”

The steel hubs, on which propellers are mounted, are quite challenging. Certain angle locations must be held in relation to other part features, and the sequence of operations must be completed in a specific order – three prior to heat treating, then afterwards four finishing ones. 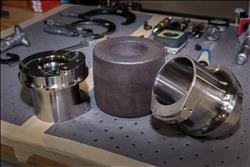 Continuous improvement is critical to Hartzell’s part processing operations, as well as to its high-performance DONE IN ONE cells. And as part of that strategy, the shop is currently incorporating the MTConnect common protocol to monitor machine uptime and cell output. In fact, the shop’s newer Mazaks came from the factory already equipped with the capability (as is the case with all Mazaks). And with its older equipment, Hartzell has completed retrofitting them for the protocol as well.

“Consider a three-machine cell, and the question arises of whether or not to add a fourth machine,” said Barhorst. “In these situations, we’ll use the MTConnect data to determine if we do in fact have the production for it and that the existing machines are actually at full capacity. Our high-performance cells have everything needed to produce completed parts. But, to get to that next performance plateau requires deeper levels/layers of data concerning situations and/or conditions that are hindering or even stopping the production of that cell. This is the detailed data we will harvest from MTConnect. And the fact that Mazak makes all its machines MTConnect compatible is a big benefit for us.”