Whirlwind Propellers in El Cajon, California, wanted to grow and expand its product offerings, but farming out the machining of its propeller hub assembly components had severely hindered the shop’s progress. Not only was the shop unable to fully control its processes and production lead times, but outsourcing work led to poor cost-effectiveness, which, in turn, stifled new product design.

According to Jim Rust, president of Whirlwind Propellers, the shop’s product line stagnated. They weren’t developing new designs nor making design improvements to existing products. That was, he pointed out, until they incorporated Multi-Tasking machine technology into the shop’s part-production operations.

Whirlwind Propellers produces two types of propellers: constant-speed propellers for aerobatic aircraft and ground-adjustable propellers for simple light aircraft. One propeller hub assembly can involve up to 23 different parts. The low volume/high mix production strategy required to keep up with customer demand for propeller hubs eventually made outsourcing virtually impossible for the shop.

“Hub assemblies are entirely comprised of close-tolerance, high-precision parts,” explained Rust. “Most are aluminum, but there are some made from 440C stainless steel. And most are round in shape, but they require lots of milling from solid billets. For example, hub housings are one of the largest assembly components. They begin as a 10" round piece of stock weighing about 85 lbs and when completely machined are only 7 lbs.” 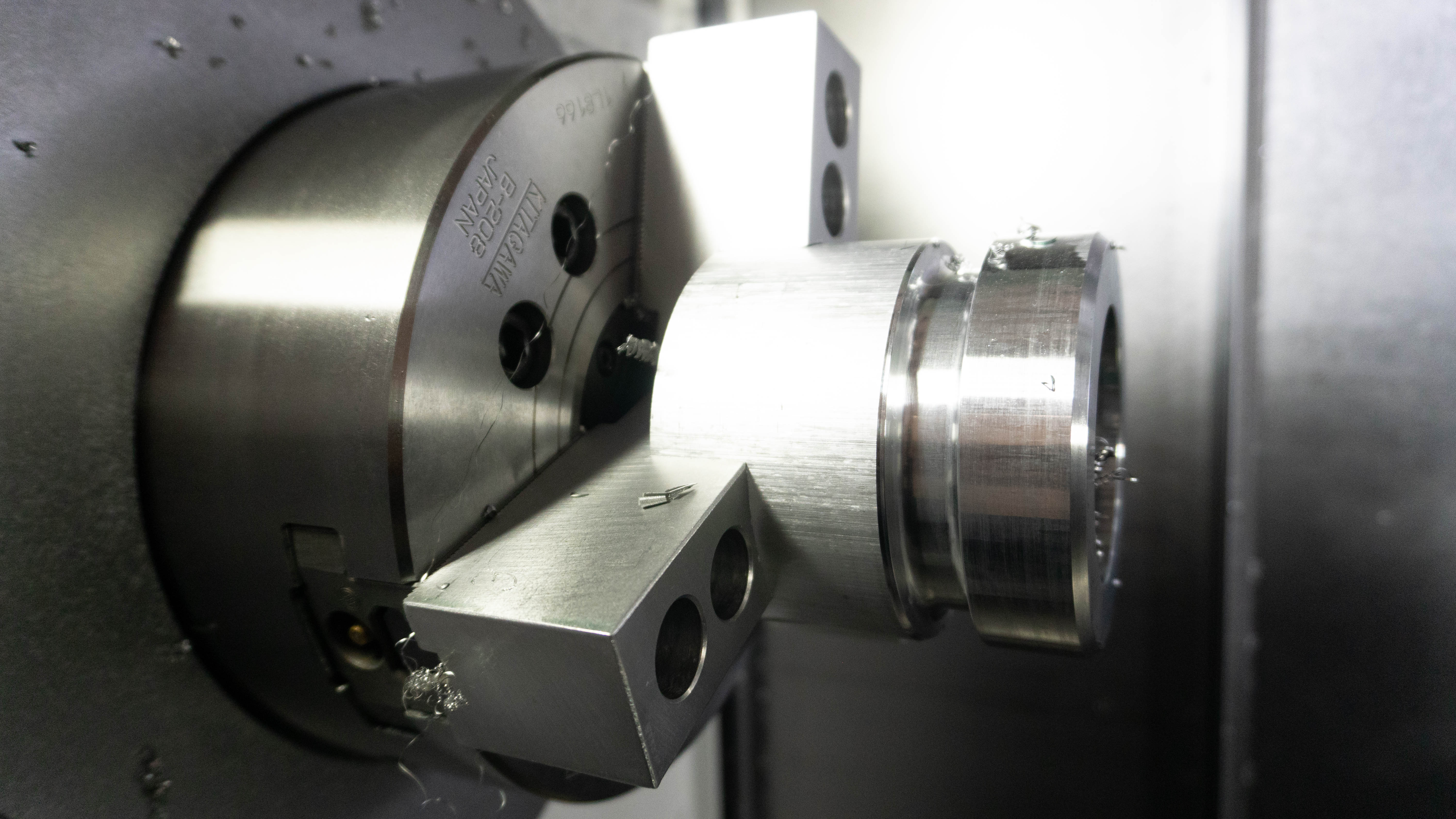 When Whirlwind Propellers farmed out its hub assembly parts, turnaround times would stretch out for months. Now, the shop machines all the parts for a hub assembly – in about 10 hours total – on its own Mazak INTEGREX i-200S Multi-Tasking Machine. The shortest machining cycle time is around one minute, while the longest is close to four hours.

“The Mazak Multi-Tasking machine has eliminated the need to work around the schedules of our machining suppliers,” said Rust. “We are no longer at the mercy of outside suppliers and can control our production schedule. For us, the Mazak has made three things happen. One, it has given time back to us for product development because now we make all the parts in-house; two, it has slashed lead times for propeller production; and three, it has allowed us to better control our part costs.” 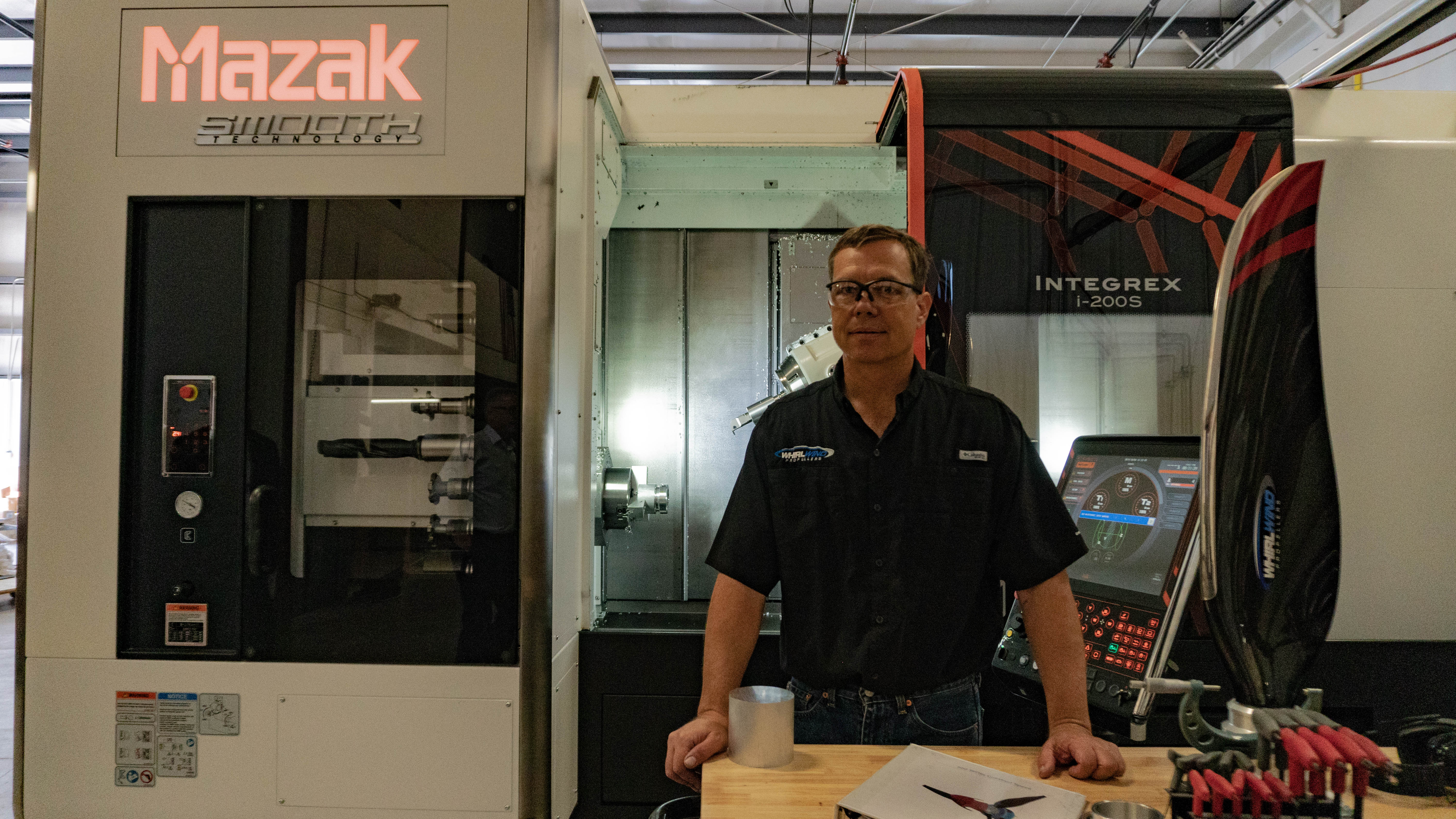 The INTEGREX i-200S at Whirlwind Propellers features twin turning spindles and a milling spindle with power equal to that of a vertical machining center’s spindle.  Within its space-saving footprint of 157.1" x 110.2", the machine productively turns, drills, taps and mills, while offering off-centerline and full simultaneous 5-axis contouring. This gives the shop DONE IN ONEÒ part-processing capabilities to reduce production lead times, improve machining accuracy and slash operating expenses.

The vertically mounted milling spindle on the INTEGREX i-200S provides 30 hp (22 kW), 12,000 rpm and a rotating B-axis range of -30° to +240°. A 36-tool magazine allows for fast tool changes and provides ample tooling for continuous part processing. And because its tool magazine is located in the front, Whirlwind Propellers’ machine operators can do programming and tool setup with minimal required movement.

With bore capacities measuring 3" (76 mm) in diameter, both turning spindles on the INTEGREX i-200S provide equally high performance with spindle speeds of 5,000 rpm and C-axis turning control. The machine’s main headstock features an integral spindle/motor design that can accommodate a wide range of applications, from heavy-duty cutting at low speeds to high-speed cutting of aluminum and other nonferrous materials. The second spindle also features an integral spindle/motor to ensure high-efficiency machining for secondary operations.

Whirlwind Propellers acquired its INTEGREX i-200S for a specific intended product line. For this project, it could not afford the time and cost involved with farming out the components. Doing so would’ve eaten away all the time needed for designing, prototyping and proving out the parts.

“To contend with the farmed-out part-turnaround times, we would carry a lot of WIP and order parts two months in advance,” explained Rust. “But that really hurt our product deliveries and our responsiveness to customer demands. The critical aspect of these parts is maintaining close tolerances for assembly/fitting purposes, and for some parts, tolerances must be held to within 0.0005" to avoid stacked tolerances. When we would farm these parts out to different shops, accurate fit and finish during assembly would be hit or miss.”

The shop now makes all its hub assembly parts on its Mazak. The new product line involves propellers for the most popular kit airplanes built today, and the production would ordinarily involve three to five setups on multiple different types of machines. “We just weren’t willing to make that investment in not only the multiple machines, but also in the amount of shop floor space they would have required,” said Rust. “Add to that all the tooling and manpower needed for each of the separate machines.” Once the line is in full swing, however, the INTEGREX i-200S will run five days a week, all day long, with single-setup operations. 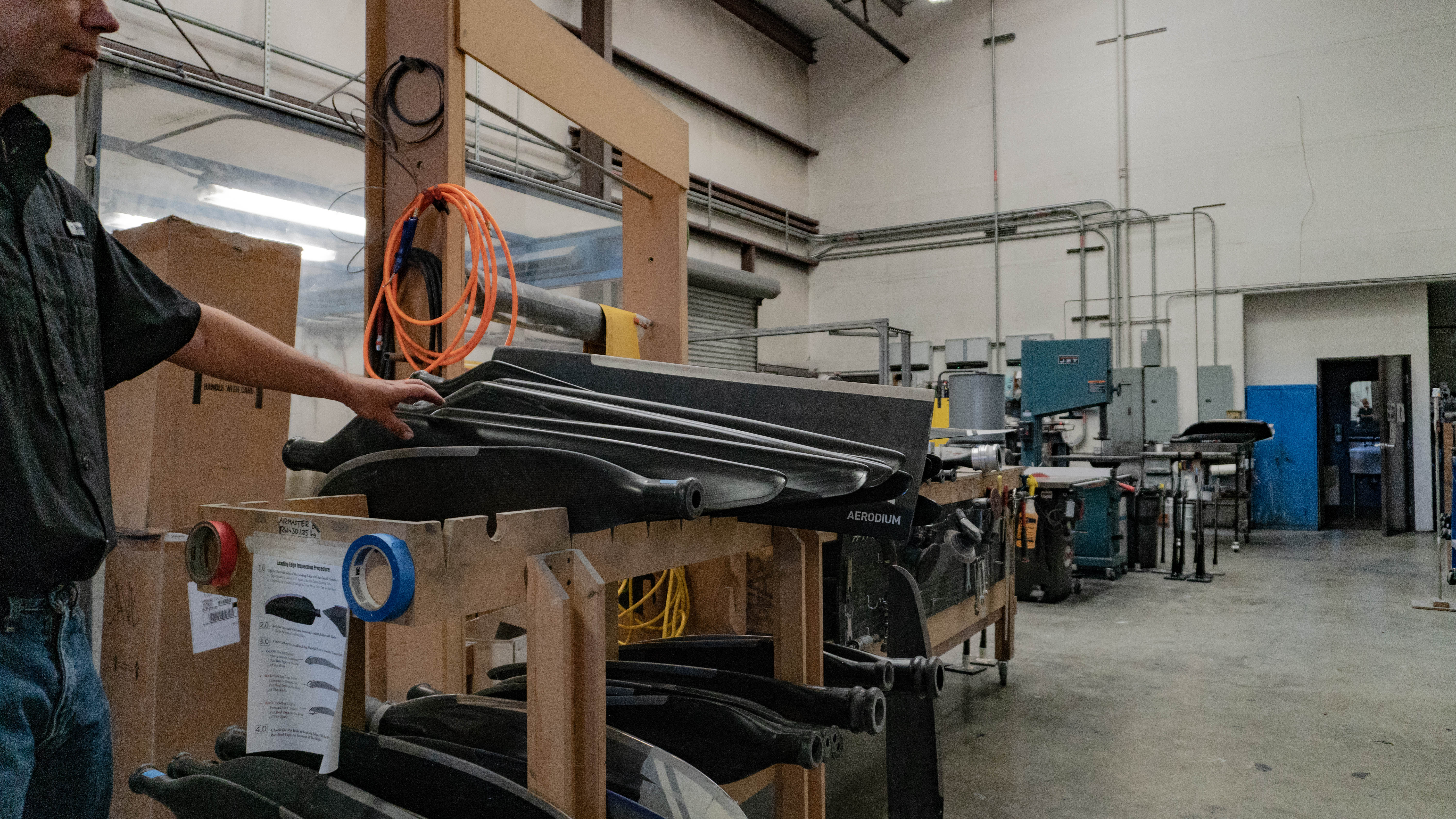 In addition to capital equipment savings, its INTEGREX i-200S gives Whirlwind Propellers the flexibility to change up its production flow. “Instead of having the machine setup for a particular part and running thousands of them, we can efficiently and cost-effectively make five of one part, three of another, 30 of another, and so on as production needs dictate,” explained Rust. “What makes this possible is the ease of setup and programming of the INTEGREX i-200S thanks to its MAZATROL SmoothX control along with its large tooling capacity.”

Rust is quick to point out that he is not a machinist by trade originally, but had some three-axis milling machine experience. He now programs, sets up and runs the INTEGREX i-200S and attributes that short learning curve to new CAD/CAM software, the machine’s advanced control and the training and application support the shop receives from Mazak.

On average, Whirlwind Propellers produces 3,000 propeller blades per year and is one of only two such shops in the world that produce carbon fiber plastic reinforced (CFPR) constant-speed propellers. The 14-person shop started in 1995, and its operations center around four major processes – composites molding, metal bonding, Class A composite finishing, electro forming and machining. Of all these processes, the easiest, according to Rust, is machining. The others are very labor intensive.

Since its inception, the shop has expanded to producing a full line of constant-speed propellers for light airplanes, airboat propellers and wind tunnel fan propellers. Whirlwind also specializes in rapid propeller and fan prototyping for some of the world’s largest aerospace companies. Rust sees business continuing to increase, as will the need to add more Mazak Multi-Tasking manufacturing technology like its INTEGREX i-200S, or, as he refers to the machine, a “robot that basically runs itself.”