Meeting the Need for Expert Machinists

A short time ago, Patrick Osborne heard that some local manufacturers were considering moving their operations out of the immediate area unless they found skilled 5-axis machinists. As the Vice President of Training and Education at the Technology and Manufacturing Association (TMA) located in Schaumburg, IL, Osborne took this news personally.

For those area manufacturers, and many other association member shops, the incorporation of full, simultaneous 5-axis machining capability is key to business survival, allowing them to process highly complex parts and boost their overall competitiveness. However, such advanced machine tool technology is only as good as the operator running it - a shop has to either find those individuals with existing experience or an effective training program to get current employees up to speed.

Enter TMA, whose goal it is to teach and train well beyond just theories in books and the classroom. Unlike for-profit training organizations or community colleges, TMA offers classes during non-work hours, and its relatively new hands-on training happens on state-of-the-art machine tools where students learn advanced machining strategies to produce real-world parts. Plus, TMA maintains a solid bench of instructors, all of whom are experienced machinists with 10-plus years in the industry.

The association currently provides a storied three-year apprenticeship program approved by the U.S. Department of Labor, Bureau of Apprenticeship Training. Serving local industry TMA members, the program teaches apprentices math, print reading and other related skills, and then trains them in CNC programming and machining, tool and die making and moldmaking.

TMA is a completely member-driven association with as many as 800 to 1,000 members at any given time. In addition to its training programs, TMA hosts networking events, represents members' interests at the state and federal levels of government, and offers health benefits.

In addition to 5-axis machine training, most members agreed the facility needed to instruct on a variety of different types and brands of CNC machines. Among those requested was Mazak and its MAZATROL controls.

According to Osborne, the association now has - in terms of its training floor equipment - what he considers a well-rounded representation of current machine tool technology to fulfill members' needs. The TMA training floor houses six CNC machines, which includes lathes, mills, a Swiss-style machine and a C/Y-axis lathe with a sub-spindle and live tooling. The most recent addition is a Mazak VERTICAL CENTER UNIVERSAL (VCU) 500A 5X vertical machining center (VMC) - the facility's first and only full 5-axis machine.

Mazak developed the VCU-500A/5X so that shops could affordably add full 5-axis machining capabilities to their parts production. "While simple in its design, the machine has several innovative features and functions that make it a solid purchase," said a Mazak spokesperson.

For example, the VCU-500A/5X has a trunnion-style rotary/tilt table with roller gear cam technology designed to provide high torsional rigidity and positioning accuracy. The table, which makes the machine a cost-effective 5-axis solution, tilts +95°/-45° in the B-axis, rotates 360° in the C-axis and can accommodate workpiece weights up to 440 lbs.

Mazak incorporated its latest MAZATROL SmoothX CNC into the design of the VCU-500A/5X. The CNC, according to Mazak, delivers processing speeds that are four times faster than its predecessor. As such, it interpolates code and sends it to the machine in the shortest time possible. The CNC also has an intuitive multi-touch screen, similar to a smartphone, that enables fast, smooth programming operations.

"Whatever our members want or need, we are going to try and provide it," said Osborne. "Why waste the time training or acquiring equipment unless it is the latest technology and mirrors what is used in our members' shops?"

With its Mazak, TMA gains more than just 5-axis training capabilities. "As an added benefit," explained Osborne, "we can use it to teach the MAZATROL control along with both simple 3- and 4-axis machining. For the most part, the machine has not sat idle since we powered it up the first day."

What also attracted TMA and Osborne to the Mazak VCU-500A/5X was its affordability and space-saving footprint. In fact, Osborne said that because of the overall conservative sizes of Mazak's VCU machines, TMA was able to step up from its initial interest in a VCU-400A/5X to the VCU-500A/5X. As a result, the association got more workpiece size capacity in the same amount of required floor space and at minimal additional cost.

"The Mazak is our crown jewel," said Osborne. "It has a post-processor, so students can develop part programs off-line and then upload them into the CAM system. They learn CAM and programming in the classroom, and when they move out to the floor for hands-on training, the part programs they generate are in the Mazak, which is completely tooled up and ready to go."

TMA obtained its VCU-500A/5X through local area Mazak distributor Machinery Systems Inc. (MSI). According to Eric Hilliard, President of MSI, both his company and Mazak approached TMA as more than just a simple business transaction. They worked to ensure TMA's success with not only its first MAZATROL controlled machine, but also with its first endeavor into full 5-axis machining.

"MSI is a TMA member, so this was definitely more than just the typical machine tool sale for us and Mazak," said Hilliard. "Through its partnership with MSI and Mazak, TMA received discounted service rates, training for its trainers and the promise of applications engineers present at TMA open house events for running demonstrations on the 5-axis Mazak." 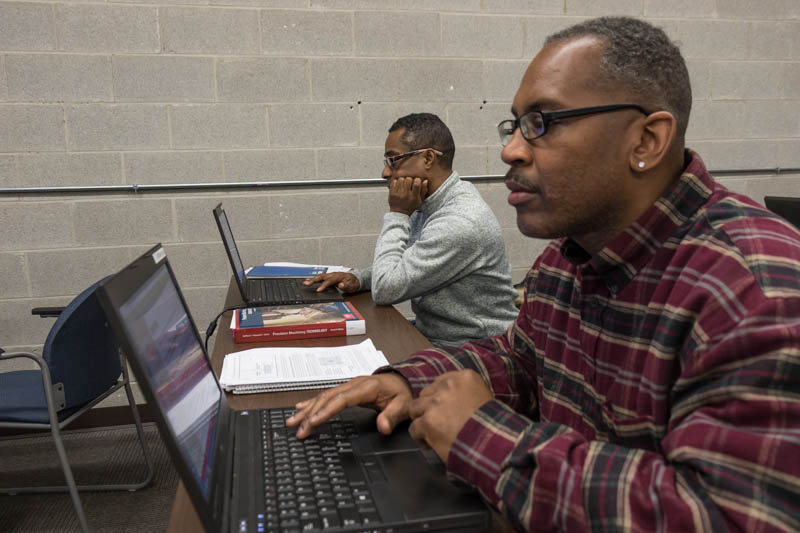 Adding to Hilliard's comment, Osborne said, "It is the partnership with MSI and Mazak that has truly made this project a success. Without the level of trust and support from those two companies, TMA would have passed on the machine. Also, we are extremely impressed with Mazak's Midwest Regional Technology Center. Its events, the facility as a whole and what it provides is inspiring."

TMA's Mazak machine is the newest addition to the association's three-year apprenticeship program that typically starts with a theory-based curriculum. To qualify for TMA training, applicants must first pass a pre-test that covers basic math skills and blue print/feature locating and other related aptitudes and capabilities. Once a student is accepted into the program, the first 14 weeks are spent teaching math and print reading skills. In the second semester, students move to math level II and machine tool technology. TMA also runs a separate hands-on CNC training track that is made up of several different courses.

Machine tool classes start with the basics with manual equipment and hand tools. For instance, students learn simple climb milling on a knee mill, turning operations on a lathe and manual grinding. But most importantly, they gain the required skills set forth by the National Institute for Metalworking Skills (NIMS), since TMA is a NIMS-accredited facility. In fact, Jack Krikorian - TMA's one full-time instructor among its staff of 25 - holds one of the highest numbers of credentials in his field in the United States, and Osborne occupies a seat on the NIMS board of directors.

At the end of the program, students are NIMS tested. If they pass, they earn credentials for set-up and operation of mills and lathes along with Materials Measurement and Safety (MMS).

Once students have earned their NIMS credentials through the TMA program, they know how to set up and operate lathes and mills as well as program in G-code, modify programs and identify any potential errors. They can set up tooling - touching off and determining proper offsets - and then machine an actual part out of steel, aluminum or brass using cutting fluids or running dry.

TMA also acts as a training arm to local area high schools to train their shop class instructors on how to teach CNC.

The instructors at TMA bring extensive know-how and skills to the table. Krikorian, for instance, has more than 25 years of experience. He worked full time as a machinist, attended TMA training and became a master journeyman multi-cavity moldmaker. His passion had always been teaching, so he left his job and worked as an instructor at a community college before seizing the opportunity to teach at TMA full time. Many other TMA graduates, like Krikorian, return to teach at TMA, but on a part-time basis.

Krikorian develops curriculum, advises on training program issues and assists other instructors during the evening courses. The part-time instructors work full-time, mostly in the moldmaking or tool and die industry sectors. In addition to those who are machinists, a few instructors are designers, while others are operations managers who teach the theory classes and other specialty subjects. These are all paid teaching positions, and Osborne is always actively recruiting to bolster the TMA bench of instructors.

At any given time, there can be as many as 200 students enrolled in the combined TMA training programs. In the evenings from Monday through Thursday, the facility's parking lot is full and its classes at maximum capacity, as is the hands-on training floor.

"We want and need more of every type of machine, including additional Mazaks," said Osborne. "We plan to expand the training floor, add more on the CAM software side as well as obtain inspection systems such as a CMM. We are currently still conducting manual machining classes at our old facility, but we hope to have it all in one place so students can start at the manual stage and progress to the top of the learning pyramid to full 5-axis machining on our Mazak, and accomplish it all in the same building."

TMA and Workforce Development The idea for the Technology and Manufacturing Association (TMA) started in 1925, when it was known as the Tool & Die Institute. It was formed by eight small manufacturers to pool their resources for better health insurance benefits, but most importantly for training. Trainees would work with a leadman or journeyman during the day, and then come to the association at night to learn the theory aspect of machining. In turn, what an individual learned in the evenings he or she then applied during the workday on the shop floor. In the 1980s, the TMA facility graduated approximately 400 apprentice candidates per year. Unfortunately, the training program slowed to a near halt in the mid 2000s, until 2011 when Patrick Osborne was hired to get the program back up and running. The TMA training program restarted with 30 apprenticeship candidates and has now grown to over 150 students. In 2013, TMA launched its current hands-on training curriculum. Beyond training, TMA plays a vital role in its community workforce development. Various local groups aimed at reducing poverty through employment work with TMA, one of which is Bethel New Life from Chicago's West Side. TMA has also worked with the Safer Foundation, an organization focused on reducing recidivism among non-violent criminal offenders. Accepted offenders live in adult transition centers and within a 16-week time period can earn NIMS accreditation from TMA and ultimately find employment. According to the Safer Foundation, its recidivism level has dropped due to the availability of the manufacturing-oriented training from providers such as TMA. In addition to benefitting the participants themselves, TMA members gain desperately needed skilled labor. Once these individuals gain employment, their employers can send them back to TMA for advanced CNC hands-on training.