Medical Shop Fixates On DONE IN ONE Throughput 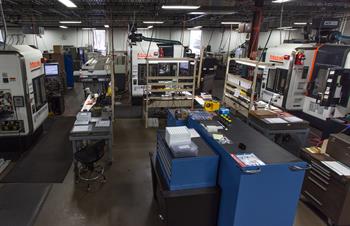 Lowell Inc, a medical contract manufacturer in Minneapolis, sometimes ignores part machining cycle times, and instead focuses its attention on overall throughput speed. In its current state, the shop could immediately reduce several of its machining cycle times by half, but doing so would add significant amounts of manual processing to the equation.

The 78-person shop always strives to economize its use of skilled labor. Whenever possible, it avoids having one person stationed at a single machine trying to keep pace with it while also racing to perform the subsequent manual operations such as deburring and in-process inspection. This slows overall throughput, so rather, Lowell incorporates advanced machine tool technology that provides complete part-processing capability to basically eliminate the need for manual operations. This frees machinists to tend multiple machines, making those individuals even more productive.

Founded in 1964 by the late David Lilja and now under the second generation leadership of his son, Patrick, Lowell specializes in manufacturing implantable medical devices such as orthopedic implants for the spinal, trauma and extremity markets and cardiovascular parts for mechanical circulatory support and valve repair.  These are typically very complex  multi-component assemblies like pedicle screws, cervical plates, cross connectors and left ventricular assist devices (LVAD). Almost  all are multiple-piece systems in which individual components must function properly when combined with each other. Plus, designs vary from customer to customer, so basically every job at Lowell is a custom one.

On top of this, medical OEMs continue to re-design their implants to provide increased flexibility in the operating room. In spinal fusion procedures, for instance, surgeons can now readily  adapt an implant to a patient’s anatomy.  Resulting in less time on the operating table and better outcomes. 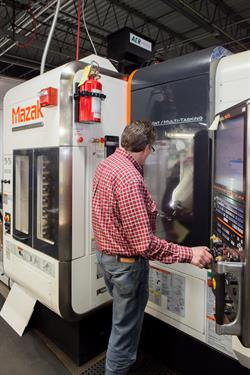 This demand for customization and adjustability, along with smaller devices for minimally invasive surgery (MIS), present notable machining challenges for  implant manufacturers such as Lowell. Once the shop figures out how to hold these very small parts, it must then machine tiny, intricate, highly complex features into them – regularly using cutting tools smaller than 1 mm in diameter.

To tackle its most challenging parts, Lowell recently installed three Mazak INTEGREX i-150 Multi-Tasking Machines and grouped them together in a cell configuration. The machines provide complete DONE IN ONE part processing capability to eliminate manual operations and increase overall throughput. They simplify workholding to just collets and chucks; easily handle parts that vary from one customer to the next; and, in many instances, reduce part machining cycle times as well.

Each INTEGREX i-150 features a C-axis CNC-controlled turning spindle, vertical B-axis milling spindle and back working vice/part support center for DONE IN ONE turning, multi-face, multi-angle and full 5-axis contouring. Lowell opted for the high-speed 20,000-rpm milling spindles and 72-tool-capacity front-loading tool magazines for its machines as well.

With the three machines configured identically and arranged in close proximity of one another, machinists can easily move from machine to machine without having to learn a completely different machine or programming language.

On the Mazaks, Lowell generates practically all parts from barstock 0.375” to 1.250” in diameter. LNS Quick Load Servo 65 bar feeders automatically feed 40”-long bars into the machines. The shop chose several machine options that further enhance machine performance. These include coolant chillers, scales on all axes and advanced CNC control features for high-speed machining.

According to Ron Spah, Engineering Director at Lowell Inc., the Mazaks streamline the entire part machining process, especially programming and set up. For instance, he said that the machines, once installed, immediately eliminated the need to spend between two and six weeks designing and programming workpiece fixturing. 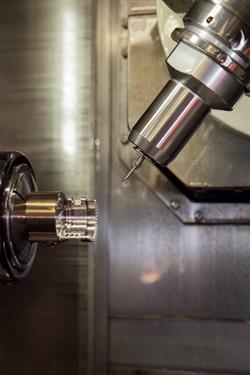 “Prior to the Mazaks, our programmers would have to conceptualize what the workholding needs would be in addition to programming for the part itself,” explained Spah. “Plus we had to use a lot of form tools as well because our standard vertical and horizontal machining centers, for instance, were unable to access every intricate part feature.”

Workholding fixtures on the Mazaks are basically the machine’s chuck and collets. Their tilt milling heads along with programmable C-axis turning spindle movement provide access to all part surfaces and eliminate the need for form tools.

“Since we machine parts from bar stock, we essentially program parts in space using the machines’ MATRIX 2 programming platform,” said Spah. “With the Mazaks, there is no fixturing to restrict programmers or limit machine movement, and we hold parts the same way every time, except a collet diameter might change depending on bar stock diameter.”

Before the INTEGREX i-150s, turning machines with Y-axis capability and live-tool turret stations gave Lowell multi-tasking part processing ability. The shop did a lot of work using angled heads and form tools to go beyond the normal capabilities of its conventional machine tools. However, as part complexity increased, the shop found that those called for more tooling capacity than a turret could supply.

“Almost all of our parts require surfacing, so we need roughing and finishing tools. And with the tool capacity of the Mazaks, we are able to load the machines with resident tooling likely to be used on most jobs and still have plenty of room for custom tools for specific jobs as well,” added Spah.

He also mentioned that when compared with the shop’s vertical machining centers (VMC) and horizontal machining centers (HMC), the INTEGREX i-150s handle parts within their much smaller work envelopes, while also providing a higher degree of motion below center. This, according to Spah, reduces interference and allows the shop to use shorter, more rigid, tooling. Processing smaller medical parts on the VMCs and HMCs required longer tooling overhangs to work around fixturing and compensate for the inherent greater masses of those style machines. 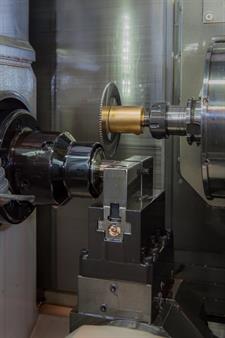 Within the INTEGREX i-150s, Lowell runs pure oil as a cutting coolant, which is why the shop elects to not operate the machines lights out, per se. Rather, it runs them lightly tended – even at night – with someone always close by to check on them periodically.

“Because we run pure oil, we equipped our Mazaks with fire suppression systems and modified pumps and filters that Mazak and its distributor Northwest Machine, in Rogers, Minn., helped us with,” said Spah. “For our small diameter tools, we believe oil performs much better as compared with a water soluble coolant. Oil stays in the cut longer, helps generate smoother surface finishes,  increases tool life and does not provide a habitat for bacteria growth.”

Rick  Cullen, VP of Operations added there are several jobs  the shop would have shied away from had it not been for the DONE IN ONE capabilities of the INTEGREX i-150s. He mentioned one job in particular involving a cardiovascular component comprised of right- and left-hand halves. Without the Mazaks, the shop would have been unable to cost-effectively produce the parts or meet the job’s extremely tight delivery time.

The right and left-hand sides form the complete titanium cardiovascular part. Lowell machines them complete from barstock using cutters as small as 0.020” diameter. In operation, the INTEGREX i-150 performs all the front-working operations with its milling spindle while the part is held in the turning spindle. Then after a cut-off operation, the machine’s back-working vice clamps on to the part and flips it over for back-working milling operations. Once the part is complete, the machine automatically unloads it.

“Without the Mazaks, we would have to mill basically all the part features – the majority of which actually involve turning,” said Tim Nelson, Manufacturing Engineer and lead programmer for the Mazak cell at Lowell. “The INTEGREX i-150s let us turn and mill exactly what and where we want, and all in one setup. Instead of painstakingly having to prepare part blanks if the job were run on our conventional milling machines, we can run them from barstock and use a bar feeder as part of a fully self-contained fully automated system. With other more standard  machines, we’d have to machine a few features on the part, remove it from the fixture, reposition it and finish  the rest.”

Lowell strives to be their customer’s “premier partner for the development and production of technologically advanced, implantable medical devices.”  The INTEGREX i-150s are a key component of reaching that goal.  Because of their processing flexibility the i-150s are used in both quick-turnaround development jobs that can range from 1 to 50 parts to full-scale production in the tens of thousands.

Lowell works with its medical OEM customers throughout all stages of the product development cycle. This extensive involvement coupled with advanced machine tool technology such as that of the INTEGREX i-150s contribute to the increased speed at which those customers can bring their products to market.

2014 marks Lowell’s 50th year in business.  In the future, they  plan to continue their growth and to look at expanding into new applications in  cardiovascular components as well as jobs for other medical sub markets such as craniomaxillofacial (CMF) , vascular and neurology. And according to Cullen, the Mazaks are a big step in the “part processing versatility direction” the shop has taken to handle these other jobs and do so quickly and cost-effectively. While at the same time, Lowell will also continue to fixate on increasing its overall throughput and thus its profitability.