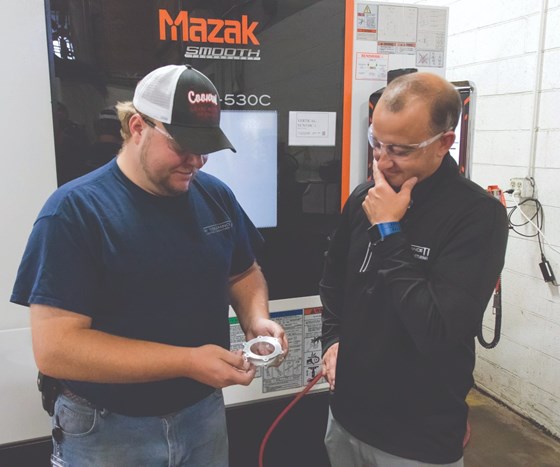 In Tolerance Contract Manufacturing of Cedar Rapids, Iowa, operates under the philosophy that it should maximize the use of its people and equipment. To satisfy this, all the shop’s machinists program, set up and run their own jobs in addition to simultaneously managing the operations of multiple machines and cells. The 40-person shop does cell-machining operations wherever possible, and at any given time, there can have as many as 800 active jobs circulating around its production floor.

On the equipment side, the company’s strategy means the shop only incorporates those machine tools that it finds to be fast and accurate—machines that produce parts in the least number of setups with easy-to-program controls. Most importantly, they must provide the performance consistency needed for the shop to reduce its scrap and rework rate as much as possible.

This production approach has served the company well in turning, milling and Swiss-type work it performs on aluminum and stainless steel for government and commercial aircraft programs. In particular, it helped the company win a job machining waterline barb fittings for a Tier-One aerospace supplier. The job consisted of producing 8,000 parts per year in six different variants, with the entire job calling for 48,000 pieces.

As bidding began, the company realized that machining the parts in basic turning centers would be too costly. In Tolerance COO John Renning says, “We would have been nowhere near the competitive price we needed to win the work and still be profitable. The job would have had to run on basic turning centers and would have required two operations, along with two first-piece inspections and a final-piece checkout.” The extra time caused by additional setups and inspections would translate to a higher bid, potentially losing the job.

Instead, the company turned to the HQR-150MSY multitasking machine from Mazak Corp. (Florence, Kentucky). “The machine’s speed, multitasking machining capabilities and unattended operation was what won the job for us,” Mr. Renning says. 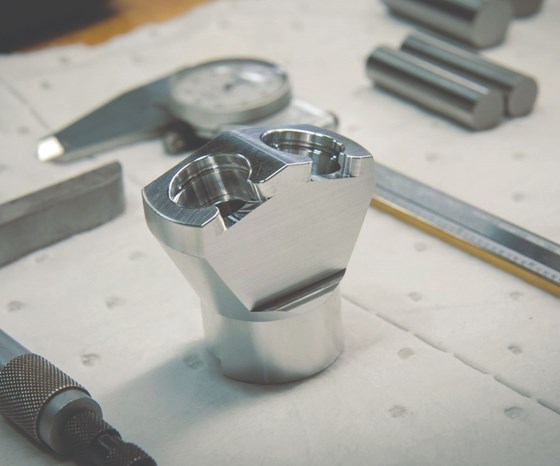 The HQR-150MSY is a two-spindle, two-turret machine with milling and Y-axis machining capability. Each of its turrets holds 12 tools and can work at either the machine’s main or second spindle. The machine performs high-precision coordinated hand offs from its main to second spindle with an accuracy of 0.0001 inch, says machinist Shawn Flannagan.

“We have to hold part-feature orientations from first operations to second operations,” he explains. “The HQR-150MSY can machine all these features and maintain known part location. So, when the main spindle hands off to the second spindle, it orients the part prior to the hand off so the known part position is maintained in the second spindle. We’ve done 8-inch-long parts and had the position timing from the first side to the backside within one degree of tolerance.”

These features removed the need for additional setups and inspections, cutting down the cost of producing the parts. However, this was not the extent of the system’s cost-saving measures. For unattended operation, the shop equipped it with a bar feeder and rotary-rack parts sorter. The machine’s speed also helps the shop avoid having to machine portions of a part on one machine, then remove it and finish the rest on a second machine, further reducing the number of setups required.

The HQR-150MSY isn’t the only Mazak equipment used throughout In Tolerance’s shop floor to maximize efficiency. Practically all the machines at In Tolerance are Mazaks—four turning centers, seven vertical machining centers (VMCs) and four horizontal machining centers (HMCs) occupy the shop floor. Of these, the shop’s most recent additions include two VCN-530C VMCs, which are equipped a SmoothX computer numerical control (CNC). The controls are designed to have a user-friendly interface that enables fast uploading and downloading as well as machine positioning. According to the shop, it significantly reduces part cycle times, in some instances as much as 25 percent. With the high spindle speeds of the machines, the cycle times drop even further. Additionally, it enables the shop to turn corners faster by increasing processing speeds. 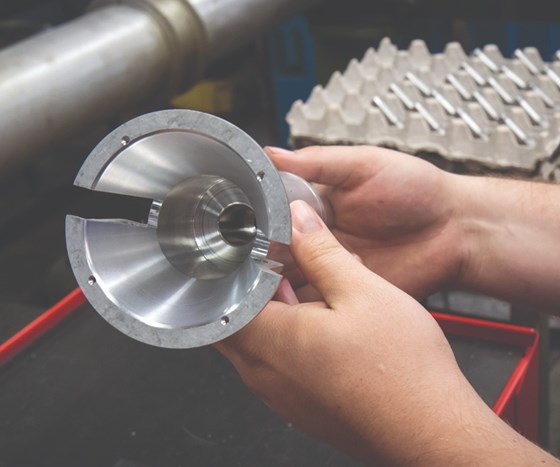 While the SmoothX is a relatively new, more powerful and faster control, it is said to be similar enough to the shop’s Mazak Mazatrol controls that machinists can move from older systems to newer ones without difficulty.

Another way In Tolerance has improved its part-processing speed is by investing in the HCN-4000, a HMC. The machine’s faster spindle speeds in particular enable the shop to keep operations basically the same but complete them much quicker for profit gains of 20 to 30 percent per job. For example, in one job the 18,000-rpm spindle speed reduced a 2.5-hour cycle time to just over an hour.

The HMC features a standard two-pallet changing system. First operations will run on one pallet, and second operations will finish on the other, so parts come out of the machine complete. Its 80-tool storage capacity enables the shop to tool it up to run three or four different jobs, maximizing production efficiency.

The speed of its newer Mazak machines enables In Tolerance to run bigger job lot sizes faster, which equates to less inspection time. Machine speed and consistency help reduce inspection sampling sizes, and faster machines mean the shop produces more in the same or shorter amount of time than previously. For example, instead of producing five pieces for one job, then changing over to the next job, In Tolerance can produce 15 pieces in that same amount of time with all those pieces going to inspection at once.

According to quality manager Tammy Baker, more parts done faster in the same amount of time reduces inspection time. It not only eliminates the number of setups and tear downs on the shop’s machine tools, but also on its inspection equipment as well.