Hansen Engineering Co. in Harbor City, Calif., constantly looks for trouble to maintain its competitive advantage. As a supplier to the aerospace industry, the shop specializes in tackling those troublesome jobs that other shops have given up on or tend to avoid altogether.

These challenging jobs frequently involve awkward and extremely complex medium- to large-sized parts – or even full assemblies – made from difficult-to-machine materials, such as titanium or Inconel. Most often, the parts require huge amounts of material removal, and manufacturers must maintain specific surface finishes and tolerances.

Since its start in 1962, Hansen has always provided its Tier One aerospace industry customers with high precision, quality and competitively priced airframe and jet engine parts delivered on time. However, it was only a few short years ago that the shop was able to also provide the same for the more challenging jobs and still turn a profit. The strategy that made this possible, according to Jody Lay, CEO of Hansen Engineering Co., was advanced manufacturing technology that not only increased production efficiency for all the shop’s jobs –both the easy and the challenging ones – but also allowed for lights-out unattended part processing. 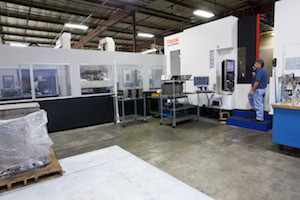 The technology Lay referred to is a fully automated PALLETECH System from Mazak Corporation consisting of two CNC machining centers, a rail guided pallet-transferring vehicle, part load/unload station and multiple pallet-stocking stations. According to Lay, the cell has been critical to the shop’s cumulative growth of 30 percent since 2008 and its ability to take on more troublesome jobs, which currently amount to 20 percent of the shop’s total workload. And Lay said that percentage continues to increase.

Because of the PALLETECH System’s flexibility, it provides increased efficiency to all production needs whether they are high-mix low-volume, high-mix medium-volume – as is the case at Hansen – or high-volume operations. The system is compatible with Mazak’s wide range of Horizontal Machining Centers and available in single, double and triple level pallet-stocker configurations. There can be as many as 16 machines, six to 20 pallets and up to eight loading stations in one PALLETECH System.

For its PALLETECH System, Hansen initially started with a 5-axis Mazak INTEGREX e-1060V/8 II Multi-Tasking Machining Center, the load/unload station, pallet-transferring vehicle and 12 pallet-stocker stations. But because the PALLETECH System is modular in design and pre-engineered, it allowed Hansen to easily and cost effectively grow the system.

It now accommodates the second machine – a Mazak HORIZONTAL CENTER NEXUS (HCN) 8800-II Horizontal Machining Center – as well as provides space for yet another future INTEGREX e-1060V. Additionally, it now has a 16-pallet stocker capacity with room to expand that amount to 36 if needed when the third machine is installed.

With the INTEGREX e-1060V/8 II, Hansen easily machines hard-to-reach part features without having to unclamp and reposition parts. This capability also helps the shop hold part tolerances that can be as tight as +/- 0.0004”. 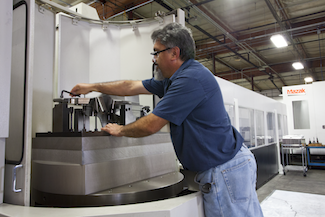 “The repeatability of both the machines is phenomenal,” said Lay. “Once we know our programming and tooling is good, we don’t worry about the Mazaks, and they give us good parts every time. Plus, they both feature 120-tool storage capacities for extended run times.”

Currently, the PALLETECH cell runs, for the most part, nonstop during Hansen’s two 10 to 12-hour daily shifts, six days a week. And key to the system’s unattended operations, Lay said, is the reliability, precision and performance of the Mazak machine tools.

“In deciding to incorporate the PALLETECH System, we realized well in advance a need to automate and machine parts lights out, especially to be competitive in processing those challenging parts,” said Lay. “In the past, we’ve always used twin-pallet machines to increase production, so the move to the PALLETECH System was a natural and easy transition. Now, part-processing times involve only actual machining. Setup time is a non-factor because we keep the system’s 800-mm (31.5”) square and round pallets stored and ready with fixtures and simply cue them up with the robot when the job runs. We also keep a couple pallets open for new incoming work as well and for handling the occasional emergency rush job.”

He went on to say, “We’ve improved profit margins on every job run through the PALLETECH System and have actually passed on to our customers some cost reductions as a result. That is huge for us because we are constantly under pressure to reduce costs. If an aerospace shop in today’s industry doesn’t continue to do so, it won’t be working for any major OEMs very long.”

Because it takes on the troublesome jobs, Hansen works with some tough materials, the most predominant being titanium. In fact, the shop has so much experience in machining the material that it touts itself as a “titanium expert” and one that has perfected its machining of the material, in particular during lights-out operations. 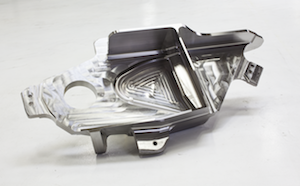 According to Lay, processing titanium efficiently requires a combination of machining techniques and advanced machine tools such as the Mazaks. Among the techniques, the two used most often are high-speed machining and what he referred to as “sneaking up on a part” – meaning the part is rough machined, checked and straightened, then machined some more, checked and again straightened.

When processing parts through the PALLETECH System, the shop typically rough machines them on the HCN 8800-II then finishes them in single setups on the INTEGREX e-1060V/8 II using 5-axis cutting. The 5-axis machine helps the shop generate its required part surface finishes, which can range from Ra 125 to Ra 63.

Hansen’s rough machining operations usually involve a lot of material removal. A perfect example of this is a particularly troublesome 6AL-4V-titanium part for an aircraft nacelle. The large part begins as a 270-lb piece of raw material and, after machining, weighs only 70 lb. However, as that much material is machined away, explained Lay, parts will heat up, move and warp.

To prevent heat buildup and part warping, Hansen uses, in addition to high-pressure coolant, high-speed machining. For this machining technique, the INTEGREX e-1060V/8 II provides a maximum machining feedrate of 42,000 mm/min (1,653 ipm), while the HCN 8800-II is up to 60,000 mm/min (2,362 ipm). Such high speeds are significantly beneficial, particularly when the shop is trying to control heat buildup and shorten cycle times for parts that can require over 20 hours worth of machining. 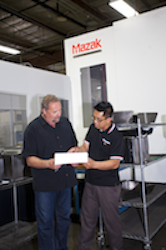 Although the high-speed technique involves an increased number of passes, it actually reduces machining cycle times as compared with running heavy depths-of-cut at slower speeds. Additionally, there is less stress on the part, and the technique is stable, which, according to Lay, makes it more conducive for use in lights-out operations.

Along with high-speed machining, Hansen will “sneak up” on a part’s finished size. This sequence of steps is repeated a few times until finished part size is achieved. The method may be a bit more time consuming, but when the raw material for one titanium part can be worth upwards of $12,000 before even being touched by a cutting tool, it is well worth it.

As Hansen continues to target such troublesome aerospace parts and build on its titanium machining expertise, Lay said it will further grow and invest and look to manufacturing technology such as that from Mazak to increase efficiency and competitiveness.

“We have the work, and we are constantly opening up new capacity by streamlining our operations and incorporating systems such as the PALLETECH that allow us to run unattended with confidence,” said Lay, “so that we can provide our customers with the highest quality work and the shortest delivery times.”

In 2012, Hansen Engineering Co. won Boeing’s Quality Award for a 99.9 percent rating on quality and delivery. The shop supplies components for all model commercial aircraft, including the 737, 747, 670, 777 and 787, as well as for defense aircraft such as the Chinook helicopter and C17 transport plane. Part sizes produced can vary from small clips 2” square to large airframe components up to 160” in length and longer.