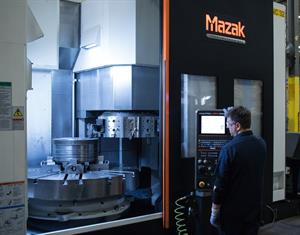 Hanna Cylinders has experienced several milestones – 100 years in business, moving operations from its original Chicago facility to one in Libertyville, Illinois, then to its current location in Pleasant Prairie, Wisconsin, each time because of increased growth. But in regards to the company’s manufacturing operations, it could be said that some of the most significant changes started around 2011 and continue on today.

In 2011 general manager Jim Warneke and manufacturing engineer Frank Laratta joined the company. As their first major project, the two were charged with giving Hanna a much needed, as they put it, “manufacturing face lift” to shorten production lead times and speed up deliveries.

Both Warneke and Laratta brought with them extensive training in lean processes and implemented it wherever they could to improve the situation. However, they soon realized that to really step up Hanna’s production operations would require totally revamping its entire shop-floor manufacturing workflow. And that undertaking would encompass bringing in some much needed advanced machine tool technology to replace several pieces of legacy equipment.

In tandem with the workflow restructuring, lean initiatives and other changes, the Mazak machine tool technology contributed to a 40 percent boost in the amount of jobs the shop ships per month. With the increased production capabilities, the shop can now keep over 98 percent of both its tie-rod and mobile-type cylinder production in-house, as well as for its new “quarter-turn” types. 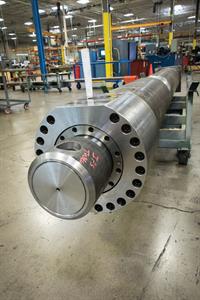 The machine’s powerful, rigid and high-torque 80-hp main spindle delivers a maximum speed of 350 rpm and maximum torque of 7,405 ft-lbs, while accommodating the shop’s bigger workpieces measuring up to 64.96" in diameter, 35.43" high and weighing as much as 11,023 lbs.

“From the start, our biggest manufacturing challenge was our equipment,” said Laratta. “We basically had one of everything and zero flexibility in terms of shifting parts to different machines in the event of downtime for repairs or maintenance. The Mazaks not only helped streamline our equipment lineup, they gave us the ability to switch parts, along with their associated tooling and setups, from one machine to another with minimal effort when needed.”

Hanna produces both pneumatic and hydraulic cylinders in standard and custom styles. Cylinder bores can range in size from 1.5" to 60" in diameter, and cylinder strokes can be up to 400" long. The company’s cylinders are used in a wide variety of applications and industries from food processing facilities to the Disney World amusement park to opening and closing huge dams, as well as in building elevators, tug boats and military vehicles. And Hanna’s new Quarter-Turn type cylinders with a yoke that turns one quarter of a full turn are often used in the nuclear power industry.

Hanna employs about 115 people and produces complete, ready-to-use cylinders. Approximately 75 percent of production operations encompass low-volume custom orders, while the remainder is high-volume standard products for OEM customers with orders that can average as many as 700 cylinders per day.

As part of its manufacturing facelift, Hanna brought almost all processes back in-house to regain control, especially when it came to larger size cylinder components. The shop would outsource these big parts and were thus at the mercy of suppliers and their schedules. It was just this reason that among Hanna’s machine tool investments were some larger size machines, one of which being the Mazak MTN 1600 that allowed the shop to bring the bigger parts back in-house. 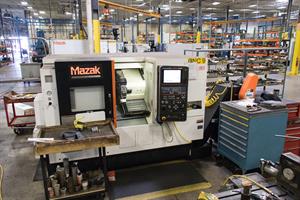 “In reality, we are now a full-fledged, fast-paced production job shop,” explained Warneke. “Typical lead times are three to five days for standard smaller bore size products and within 10 days for those having bore sizes up to 8" in diameter. However, additional options and bigger sizes (stroke lengths) can further influence lead times. But, in any event, 90 percent of the time, we get orders out the door within a week.”

When Warneke and Laratta reorganized Hanna’s shop floor, they did so with customers in mind. The workflow path is now shorter – distance wise – and much more streamlined with less necessary equipment. Parts can flow through the shop based not only on their sizes or features but also on customer needs, specific delivery times or whether or not the job is a stock one. Plus, instead of handling only one specific part size, the shop’s machining cells now process various sizes of a particular part or family of parts.

“Prior to the new workflow, there was no rhyme or reason as to how parts moved around the shop,” commented Warneke. “For instance material came to the middle of the building and sat on the floor, as opposed to racks, then traveled out to lines of machines – zigzagging back and forth between machines and cells. While adding advanced machine tool technology was a huge factor in our production improvements, simply restructuring part flow into simple straight lines made just as big an impact as the machines.”

When it comes to any type of stocking, whether raw material or parts, Hanna’s new lean practice is that “what comes in this month, gets used this month.” In addition to being lean, Hanna’s operations must be flexible and setups/changeovers as fast as possible to remain competitive as a low-to-medium volume shop in a very high-volume customer environment. 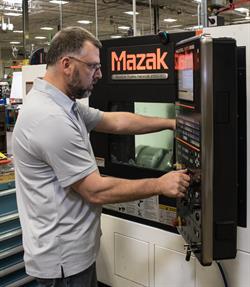 “On many of our Mazaks, we shoot for setup times of 10 minutes or less,” said Laratta. “With our old equipment, setups could take hours. In our production environment, we try to follow a 90/10 strategy for setups. This means we set up for what we run 90 percent of the time and work in the remaining 10 percent of unscheduled parts. The success of this strategy is highly dependent on the flexibility of our Mazaks. They allow us to quickly react to any unexpected changes with a lot less disruption in the shop.”

To shorten setup times, Hanna uses simple setups and quick-change tooling/workholding wherever possible, in addition to standardized workstations and machining cells each equipped with all the necessary hand tools and gauges situated within the machinist’s reach. As one example of fast and flexible part setup on one of its Mazak QTNs, the shop made special vise jaws that allow it to hold square shaped parts in the machine’s three-jaw chuck. This eliminates the time and hassle of switching over to either a two jaw or four jaw chuck.

On-machine tool-touch measuring, along with ample tool storage capacities, are two other Mazak machine features that help Hanna reduce setup times and speed job changeovers. According to Laratta, the shop’s machinists teach tool location on the Mazak machines by simply touching the tool tip to the machine’s Tool Eye automatic tool-tip measuring system. Prior to such capability, he said that the shop had to actually make a test cut, measure the part, run the tool back to home and make the necessary offset adjustment – a long and drawn out process that usually resulted in at least one scrapped part.

Part modularity, wherever possible, helps keep machining cycle times short at Hanna, as well as its overall job turnaround times. While finished parts can be different, many of them start out the same. So the shop will machine parts to certain semi-finished stages, stock them and finish machine them to a customer’s specific needs. The shop determines what to stock semi finished based on customer order history and on the most popular sizes and types often produced, and what is stocked semi finished can often change.

Besides Hanna’s setup/fixturing and semi-finished part stocking strategies, the easy-to-use common-platform controls on its Mazaks contribute greatly to fast job changeovers and shorter turnaround times, not to mention increased processing flexibility. The shop trains all its machinists to program the Mazaks, allowing these individuals to do all their own setups and programming at the machines, as well as seamlessly move from operating one type of Mazak to the next.

This, according to both Warneke and Laratta, significantly increases throughput and eliminates time wasted waiting for programs that were developed off line then sent out to the shop floor. In some instances where job lot sizes were only four or six components, they went on to say, waiting for the program could take longer than actually machining the parts.

“We had 50 or so machines that encompassed every common brand of CNC, so it was basically impossible to have a guy go from one machine to the another,” explained Laratta. “But with the Mazaks, we can move people around wherever and whenever needed, and such flexibility is huge for us. At one time, our situation was extremely detrimental. If, for instance, a machinist that ran a particular machine called in sick, that machine sat until he returned because no one else knew the control. With the Mazak controls, we have people that were trained on one of our QTNs, for example, that, if needed, could run the MTN 1600 or one of the vertical machining centers with very little additional instruction.”

Warneke pointed out that the Mazak controls provide conversational or EIA programming, and they feature onboard graphics that display exactly where problems might occur. With such capability, the machinist can quickly fix problems without having to run back and forth between a programming office and the shop floor.

“On our older machines, we’d typically scrap two or three pieces trying to get that first good part,” added Laratta. “On the Mazaks, the first piece is a good one, and we can keep programs right in the machine controls.”

Both Warneke and Laratta had a long history with Mazaks throughout their extensive careers and always considered the controls extremely user friendly. So for Hanna, they agreed that the controls meshed well with the shop’s production needs and were the smart way to go.

The controls and other features of the Mazak machines were a big part of the complete culture change at Hanna. And according to Warneke, they have literally changed the way the shop manufactures. It can now instantaneously react to changing customer needs and provide the highest quality cylinders delivered as quickly as possible to continue to outperform the competition.