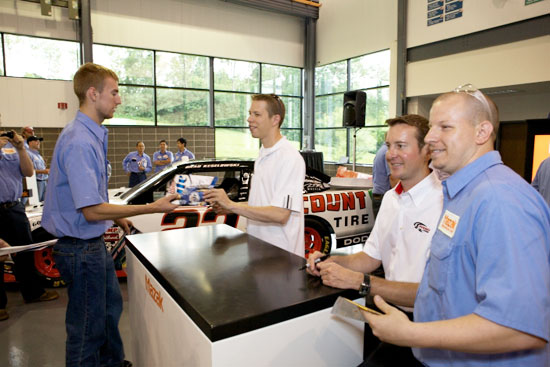 NASCAR Penske Racing Team drivers Brad Keselowski and Kurt Busch (second and third from left) sign autographs and pose for photos with Mazak employees at a recent visit to the Mazak manufacturing campus in Florence, Kentucky.

Local media was also on hand covering the event. Reporters from the Cincinnati Enquirer and Cincinnati television stations WXIX Fox 19, WKRC 17 CBS and WLWT 5 NBC conducted interviews with the drivers, discussing Penske's technical partnership with Mazak and other racing-related topics.

"We were proud to be able to welcome the Penske Racing Team drivers to our facility and to display the Kurt Busch Sprint Cup No. 22 Pennzoil car and Brad Keselowski's No. 22 Nationwide Series Discount Tire car. Mazak has long been a strong Penske Racing technology sponsor since 1994, and the Mazak logo can be seen on these Penske racing cars," said Brian Papke, president of Mazak. "Penske Racing uses Mazak machines to manufacture various critical car components, and many of those components were showcased for Mazak employees to see exactly how the innovative machine tools that they build are helping to keep Penske in the winner's circle."

During the factory tour, both Busch and Keselowski showed marked interest in the Mazak technology that plays a key role in the manufacturing of components for their racecars. The drivers also acknowledged how critical technical sponsorships, such as the one with Mazak, are to Penske Racing's success.

Mazak is considered the largest metalworking machine tool builder in the world and a technological leader of the industry. The company is well established internationally with technology centers in 30 different locations including all the major countries of the world, and factories in the United States, Japan, United Kingdom, Singapore and China. The Florence, Kentucky, facility is Mazak's North American headquarters and employs 455 people.

Busch drives the No. 22 Shell-Pennzoil Dodge for Penske Racing Team and recently won his first-ever NASCAR Cup Series road course victory, the Toyota/Save Mart 350 at the Infineon Raceway in Sonoma, California, on June 26. His racing career includes 22 victories, 80 top-five and 153 top-10 finishes, along with 12 career Cup Series poles and a Cup Series title.

As a second-year Penske Team Racing driver, Keselowski has had the opportunity to get behind the wheel of the well-known No. 2 Miller Lite Dodge during the 2011 season. Fresh off his first NASCAR championship in the Nationwide Series, Keselowski is well positioned for a strong Cup Series run in 2011.