For Land & Sea, Inc., part setups have essentially become inconsequential when it comes to machining operations. That’s because the Concord, New Hampshire, shop that produces the DYNOmite line of engine and chassis dynamometers recently incorporated a combination of effective shop floor strategies and advanced machine tool technology to dramatically shrink setup times from days to minutes.

The dynamometers measure forces generated by a wide variety of engines or motors with rotating shafts. Applications range from snowmobiles, go-karts and motorcycles to automobiles, marine engines, trucks and industrial power plants.

The dynamometers handle outputs of 1 to 10,000 hp and vary from suitcase-size units to heavy-duty systems that can fill a 40’ tractor-trailer. Different system versions include engine dynamometers engineered for precise collection of data as well as chassis dynamometers or “rolling roads” that measure torque and horsepower via large rotating drums turned by a vehicle’s wheels.

Business has been good at Land & Sea, and the company’s volume of products and market share continue to increase steadily. This was why the company’s president, Bob Bergeron, recently decided the shop’s part processing operations desperately needed advanced machine tool technology that would allow the shop to keep pace and accomplish one key goal – to reduce setup times.

Bergeron cited an example of a part manufactured on one of the shop’s older machines. “We had to machine seven sides. The job would run six or seven working days to produce 12–24 pieces. Probably three days of setup time were embedded in those seven days. And invariably, it would seem, every fourth or so time we would run the job there would be an error in one of those setups and we would not find out until the seventh setup that there were 24 junk pieces.”

“The machines we had were getting on in years, and it was time to take a look at another round of equipment,” explained Bergeron. “We wanted to shorten setup times because we produce a lot of different components in small runs typically of one to a dozen pieces. Reducing the number of setups is crucial, because any setups we eliminate can provide the best time savings of all.” 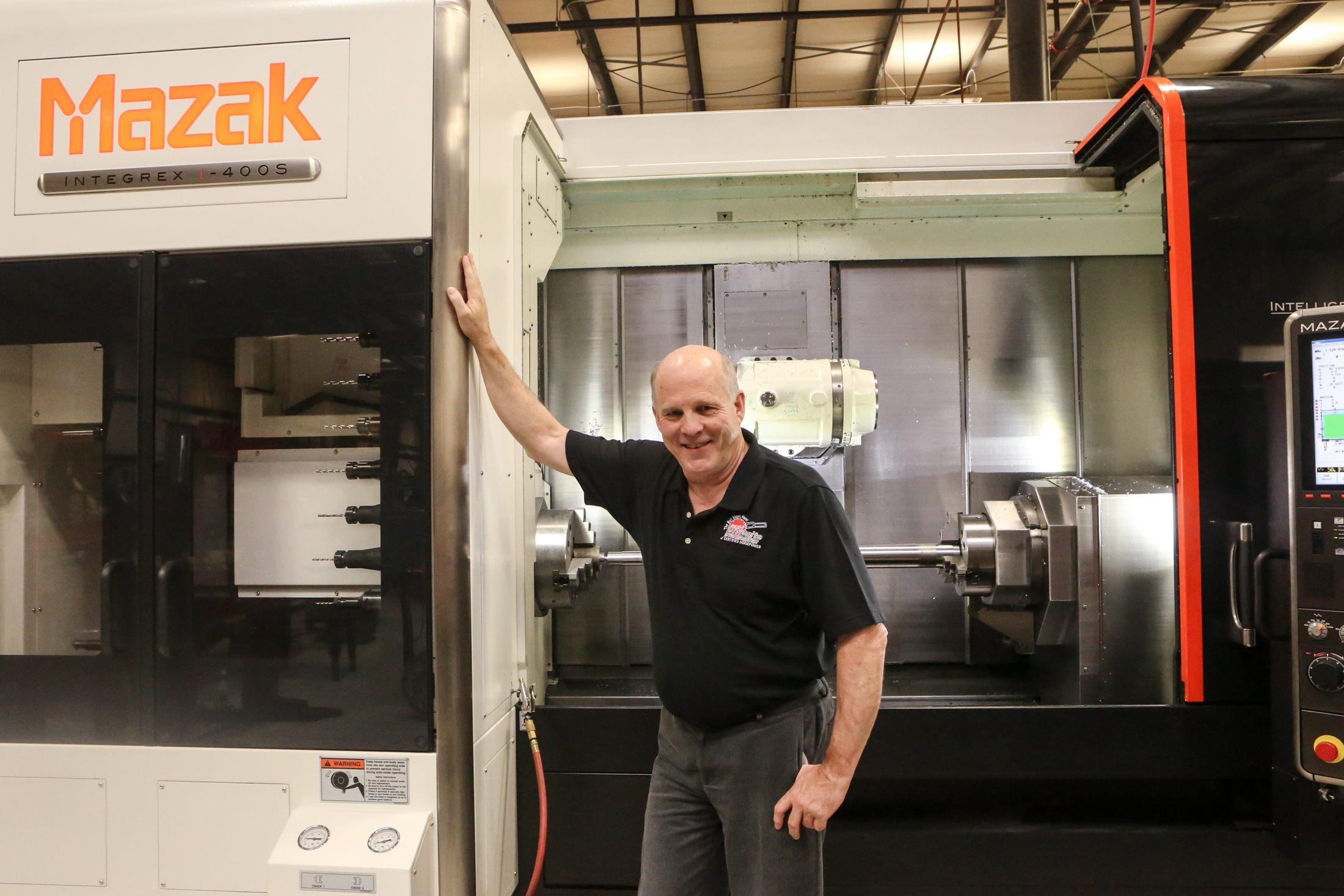 Bergeron cited an example of a part manufactured on one of the shop’s older machines. “We had to machine seven sides. The job would run six or seven working days to produce 12 to 24 pieces. Probably three days of setup time were embedded in those seven days. And invariably, it would seem, every fourth or so time we would run the job there would be an error in one of those setups and we would not find out until the seventh setup that there were 24 junk pieces.”

Bergeron’s research and focus on setup reduction, along with a need for expanded machining capabilities, resulted in the acquisition of a full simultaneous 5-axis VARIAXIS i-700 Vertical Machining Center and later an INTEGREX i-400S Multi-Tasking Machine, both from Mazak.

Bergeron said that the setup time for that job is now well under ten minutes. And, such setup reductions have been the case with most of the jobs the shop now does on its Mazaks.

When evaluating machine brands, Bergeron said that the majority of the machine tool OEMs he talked to emphasized their machines’ high-speed rapids and fast cutting capabilities rather than setup time reduction.

“We realized the benefits of fast machining in terms of cycle times and in heavy material removal part applications. But even if the machine cut at infinite speeds, for us, it would have zero affect on our long setup times,” he said.

In addition to the Mazaks, standardized tooling has also proven a key factor in reducing setups and potential tooling errors at Land & Sea. “We realized early on that we could save a lot of setup time by using standard tools,” explained Bergeron. “Such standardization allows us to reduce the number of tools that we have to custom load for each new setup.”

The strategy works because Land & Sea manufactures its own products and now, whenever possible, designs part features around standard groups of tools. This is often impossible, according to Bergeron, for typical job shops because they must contend with customer part designs requiring the use of individual specific tools.

“With the VARIAXIS i-700, there are 29 tools that stay loaded, plus a probe,” he said. “Thirty of the machine’s 40 pockets are used, leaving ten pockets for specialized tools when they are absolutely necessary. But a job that needs even five specialty tools is extremely rare. It is thrilling when we eliminate a tool on the list by redesigning a part, therefore eliminating the need to custom load a tool along with the required setup time associated with it.”

At Land & Sea, standardization is the means to maximum tool flexibility. For instance, the shop threads a variety of hole diameters with a single-point thread mill and can typically do many different holes – including tapered pipes – with one tool. And while a multi-point tool might thread a bit faster, it would claim an additional pocket in the tool magazine and would have to be loaded and touched off each time it was used. 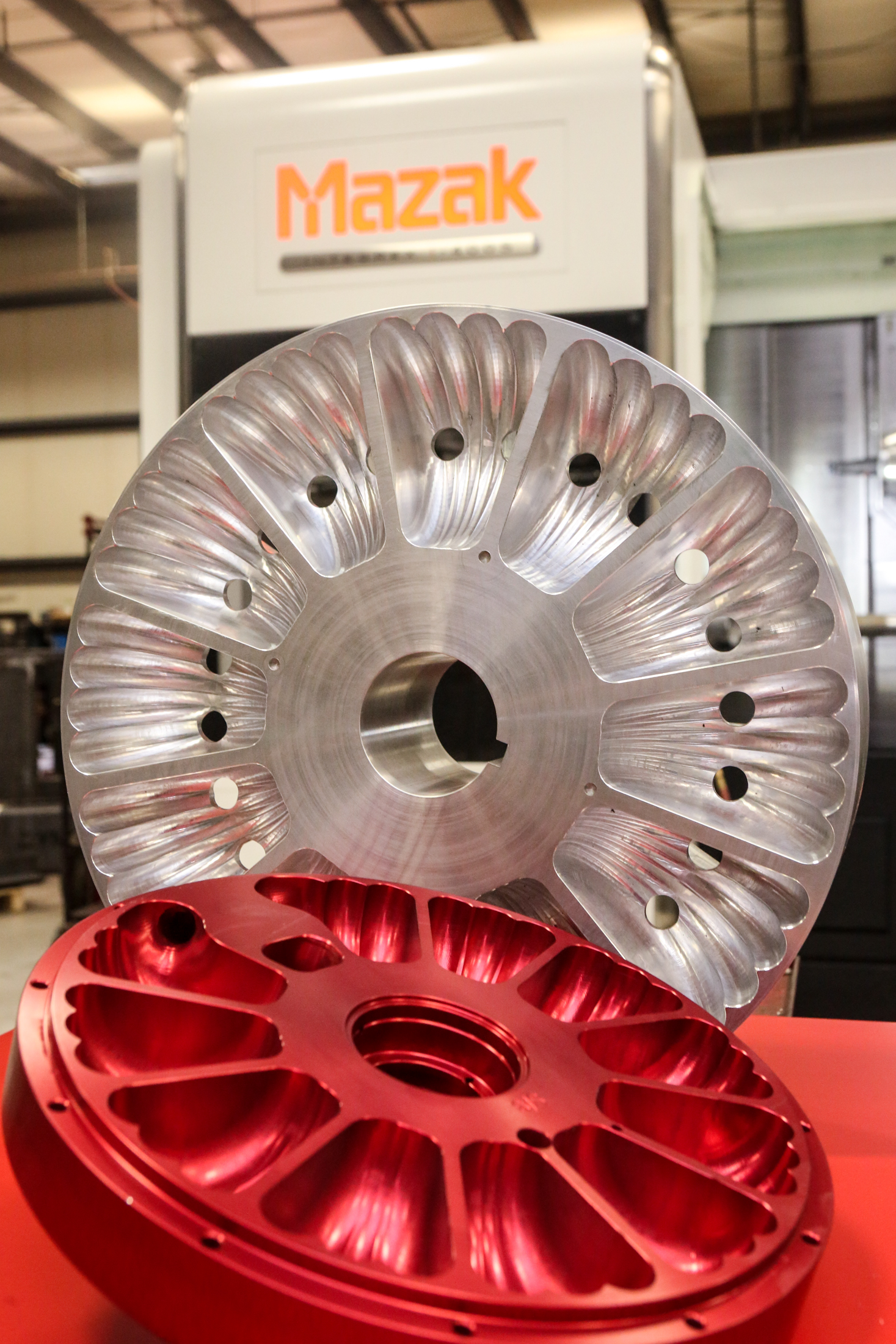 Land & Sea’s winning combination of tool standardization and the rigidity and reliability of its Mazaks has also helped the shop reduce tooling costs.

“We hardly ever break tools now,” commented Bergeron. “We use the right tool all the time and have centralized our machine programming so that none of it is performed on the shop floor. Even tool compensation codes are sent to the machines from the programming office. And in doing so, we have basically eliminated the risk of loading the wrong tools or applying them incorrectly.”

Although Land & Sea does have grinding capability, the accuracy and performance of its Mazak machines has significantly reduced grinding requirements. “We actually hold better tolerances than Mazak told us we could with the machines,” said Bergeron.

Success with its first Mazak prompted Land & Sea to purchase its INTEGREX i-400S that combines the capabilities of a turning center with those of a machining center. It features a second turning spindle that enables parts to be fully machined in one setup and minimizes fixtures, tools, work handling and non-cut time. The machine can process prismatic parts from solid blocks or castings (chucked or bar fed work), round parts or highly contoured sculptured parts. Land & Sea’s version of the machine features a 72-tool changer.

Initially, Bergeron thought a second spindle might be unnecessary because he knew parts could be quickly flipped manually. However, it became clear that such interruptions in the part process can be sources of error.

“We had plenty of parts end up in the scrap bin because they were chucked or fixtured wrong, but that doesn’t happen anymore,” said Bergeron. “When machining short runs, there is no room for error. If you haven’t made the part before, you don’t know if that manual move from one side to the other is going to give you a good part. With the second spindle, we get a good part every time, and that is critical when a job calls for making just three parts.”

Bergeron went on to say that the implementation of tooling strategies and acquisition of advanced machine tool technology was essentially an experiment to determine if setup times could actually be reduced.

“We believed we would benefit from the high-speed milling, bulk stock removal and the extra precision of the machine technology,” he commented, “but not to the degree that it was going to pay for itself. High speeds and feeds are great, but we really needed the shorter setup times.”

The choice of Mazak machines contributed to the success of that experiment. And according to Bergeron, machining on well-built, heavy duty pieces of equipment, such as the Mazaks, improves every job regardless of the number of parts involved.

“The accuracy and reliability of the Mazak machines makes it possible for us to repeat parts months and months apart without any tramming in of vises and so forth,” he added. “That is huge when you are doing setup after setup on short run pieces.”

Land & Sea’s approach to its business emphasizes partnerships with its customers. The company delivers to them not just a piece of equipment, but also an understanding of how to make full use of it.

“The dynamometer itself is one piece. It’s the part the customers can touch and feel when it shows up,” explained Bergeron. “But if the end users are unaware of how to use the machine to its fullest, then they are never going to be as happy as they would be if they really understood it. After they have the machine for a while and learn what they didn’t know they didn’t know, then they are really happy that they came to us. Our support allows them to go a lot further than they would have had they just got the piece of equipment and learned on their own. And we, like our customers, get that same level of support from Mazak when it comes to our machining technology.”

Learn more about Land & Sea Inc. by visiting their website.