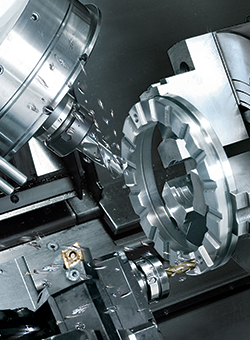 Today, when many people think of Multi-Tasking, they think of INTEGREX, the series of Mazak machines that introduced the concept to many manufacturers, and the myriad benefits shops can achieve with the technology. Without the need to transfer workpieces from one machine to the next, Multi-Tasking machines require minimal human intervention and can operate unattended for longer periods of time. They allow manufacturers to accomplish more with fewer machine tools on their factory floors, which saves valuable production space. Fewer required machines, in turn, results in lower production costs and shorter job turnaround times.

Of course, many breakthroughs made Multi-Tasking possible. From the start of its Multi-Tasking machine development process, Mazak strived for completing parts in one setup: A solid raw piece of material enters the Multi-Tasking machine, and a completed component exits. But to reach DONE IN ONE® part production, many technological advancements had to occur, such as the development of integral motors, controllers/computers with increased processing power and CAD/CAM software.

Higher power controllers, like Mazak’s MAZATROL Smooth CNCs, allow manufacturers to maintain data points across milling and turning operations within the same workpiece setup on a Multi-Tasking machine. This ensures repeatability and eliminates the risk of human error when moving workpieces from one single-process machine to the next. Further CNC advancements ensured that machines could control a greater number of machining axes and simplify part-programming requirements.

Unfortunately, traditional belt drives tended to hinder the performance and positioning accuracy of additional spindles on Multi-Tasking machines – until the development of integral motor technology. Electric motors that fully encase the machine spindle, integral motors initially delivered speeds up to 5,000 rpm and positioning accuracies within 1 degree. In addition to improving the spindle’s ability to stop and position accurately, integral spindle motors introduced the ability to perform complex contours with C-axis turning spindles. For milling spindles, the technology introduced B-axis control to the spindle along with higher rpm and horsepower.

Following the introduction of integral spindle motors, Mazak experimented with the use of worm wheels for further performance improvements, but the design had backlash issues. Instead, Mazak developed a highly capable roller cam design and is currently exploring the use of direct drive technology for milling spindle headstocks on Mazak Multi-Tasking machines. For its vertical Multi-Tasking machine platform, roller cam technology paved the way for Mazak’s tilt/rotary tables and full, simultaneous 5-axis machining.

But it was the introduction of lower turrets and second spindles that allowed for DONE IN ONE and simultaneous part processing, meaning the machine’s upper turret is working on a part in the machine’s main spindle while the lower turret works on another part in the second spindle. This configuration resulted in significantly shorter part cycle times and higher machining accuracy along with increased capacity, flexibility and productivity – all with one machine.

Interested in learning more about how Mazak developed Multi-Tasking technology, from the first combination of processes to the latest HYBRID Multi-Tasking solutions? Visit our Multi-Tasking page.